Gave a talk about the 9/11 truth movement to the ‘learning church’ here on Mersea, which has emboldened me to write something more on the blog. (In other words, I’m persuaded that I’m not completely bonkers, even if I remain a fan of Sarah Palin.) Hit ‘full post’ for text.

The first thing that I don’t believe about the official account of what happened on 9/11 is that Hani Hanjour was the pilot of the plane that hit the Pentagon. These are my reasons:
1. Hanjour was someone ‘who couldn’t fly at all’ according to the people who tried to train him (source). He was refused permission to rent a Cessna in August 2001 because his flying skills were so poor.
2. The path that flight 77 took in order to crash into the Pentagon was an extremely demanding one that would have taxed an experienced military pilot. 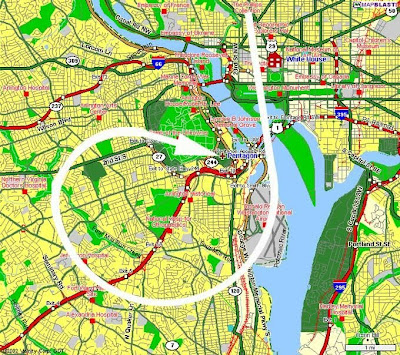 The pilot executed a 270 degree turn whilst simultaneously dropping by 7,000 feet, before levelling off to fly just above ground level in order to hit the Pentagon’s ground floor.
3. This flight path took Hanjour past the White House, past the obvious and immediate wall of the Pentagon (where Rumsfeld’s office was based) and into the only wall of the Pentagon that had – purely coincidentally – recently been reinforced to withstand an impact.

The second thing that I don’t believe about the official story of 9/11 is that the three skyscrapers toppled that day were brought down by fire. These are my reasons:
1. No steel skyscrapers either before or since have collapsed as a result of fire. This includes skyscrapers where the fires burnt hotter, for longer, over a wider area than on 9/11. Fire damage looks like this:

This is the Windsor tower in Madrid, which caught fire in February 2005. Despite having intense fires burning for many hours it did not collapse – indeed, the building functioned in exactly the way anticipated by the relevant fire regulations. 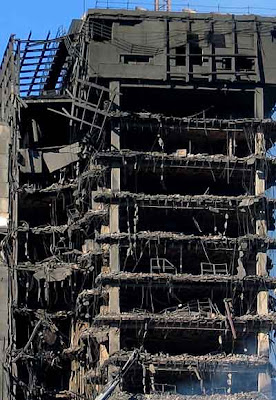 2. The collapse of the three skyscrapers on 9/11 exhibited a large number of features that are inconsistent with fire damage. These include

3. There is an extremely well understood means of collapsing buildings which produces these effects (controlled demolition). If the controlled demolition hypothesis is ruled out then it is proven that the laws of physics can be overcome in the right circumstances (eg conservation of momentum).

I don’t know what this means in a wider sense as I find most of the more plausibly worked out conspiracy theories incredible. Yet as Mr Holmes once said, once the impossible has been ruled out, whatever remains, however improbable, must be the case.

For an alternative view, go here.