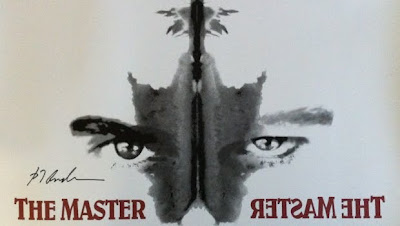 At the end of half-term week I went with my wife to the West End to catch The Master on the day of release (and in 70mm). Why go to such length? For the simple reason that Paul Thomas Anderson directed my favourite movie, and I really rate him as a director. So how does the new film rate?

Well, having avoided reviews and analysis before watching the film, I’ve been catching up on them in full over the last two weeks. Many are good, and pick out the most obvious elements, most importantly the phenomenal acting performances of the leads and the way in which the film is remarkably ‘static’. There is very little in the way of a conventional story arc – although there definitely IS one – and the film is best understood as being akin to a portrait of a relationship, rather than the story of a relationship.

However, there is one key element that I took away from the film which I have not yet seen in any other review, and I’m starting to wonder if I’m the only one who has seen it – and that is to do with the Rorschach test. Anderson himself designed the publicity posters – example above – and I believe that this is a significant key for understanding the nature of the film. That is, I believe that the film itself is designed as a form of Rorschach test.

It struck me towards the end of the film that it is structured symmetrically – that is, there are events in the second half of the film which mimic or reproduce events in the first half. Key ones are the shot of the foam trail behind a boat; the scenes on the beach with the ‘sand woman’; but also more particularly a correspondence between the scene of Freddie running across a field and the scene of Freddie riding the motorbike. There are others, but those were the ones that most struck me. So if my hypothesis is correct – in other words that Anderson has constructed a Rorschach test which invites us to bring our own meanings to the film, through which we discover things about ourselves – where does the ‘fold’ come? I haven’t analysed the timings in detail, so this could be wrong, but as soon as I asked the question I thought “it’s the jig scene”, which itself falls naturally into two halves, and which is ripe for an interpretation which links in with Freddie’s own response to a Rorschach test (first half) and also what happens at a bar towards the end of the film (a corresponding second half). Anderson is asking us ‘what do you see?’ – and suggesting, I believe, that we bring our own meanings.

Which does, of course, link strongly with the whole theme of ‘The Master’ and the establishment of a new religious cult, and whether the Master is a charlatan or a genuine guru – but those aspects have been well discussed elsewhere, so I won’t explore them further here.

In sum: a very, very fine film, 5/5 – still not an improvement on Magnolia, but I’m not sure anything ever will be, for me.