So: this is the global temperature trend of the last fifteen years. It is downwards. (Found here)

Now, in and of itself, that doesn’t mean very much – it could all be part of the natural fluctuation within an overall increasing trend, etc etc blah blah blah. (Although, obviously, the longer it continues, the more difficult the ‘mainstream consensus’ will find it to brush things away).

However, what I want to compare and contrast this graph with, is this one, showing use of fuels through the twentieth century (from Gail Tverberg). 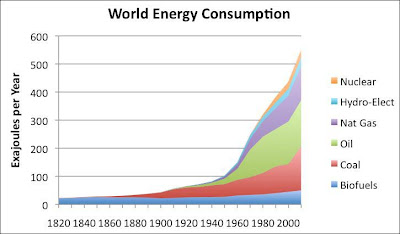 Clearly, carbon dioxide is only one factor in a chaotic system, and there simply isn’t a direct and linear relationship between the increase of CO2 in the atmosphere and global temperature change. That’s just a pesky little fact.

The interesting question, to my mind, is about how far the increase in temperature in the second half of the twentieth century is anomalous when compared to other periods of history – eg, when compared to the trend since 1700, or the trend since about 1800, or the trend since about 3000 BC. This, however, leads us into Hockey Stick territory – and it explains why that remains such a totem. If the Hockey Stick is correct, then the acceleration can be (just about) found. Yet if the Hockey Stick is fraudulent – which I believe it to be – then this is some strong empirical evidence running against the CAGW hypothesis. I shall maintain my watching brief.

9 thoughts on “Those odd and pesky little facts”