The Church of England and the Bakken Shale

People might have noticed some of the claims being made by politicians across the pond about how the US might soon be ‘energy independent’, that new discoveries of oil might lead the US to be called ‘Saudi America’ (eg here)

The particular trigger for this language is something called the ‘Bakken Shale’ in North Dakota, which has been developed heavily over the last few years (since the explosion in the oil price in 2008 basically). This oil resource has indeed made a difference to the oil produciton of the United States: 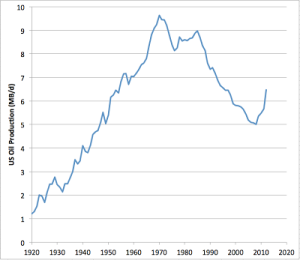 The ‘puffers’ appear to believe that this increase in US production is a) going to be sustained over time, and b) will make a significant difference to the US economy. I believe that such a view is… misguided. This is the forecast: In other words, the Bakken Shale represents a great short-term boost to a situation, but not a long term answer.

As I ponder this, I can’t help but be struck by the parallels with the Church of England. Membership of the church has been declining for a very long time, a trend partly disguised by the rise in population in England through the twentieth century. Measured as a proportion of the population, the number of CofE Easter communicants has declined steadily from 8.8% of adults in 1922 down to 2.3% of adults in 2010. (source)

Now, in the context of such a significant and long-standing decline, it is understandable that people seize upon the equivalents of ‘Bakken Shales’ – anything which offers the prospect of changing the pattern. The latest wheeze is ‘Fresh Expressions’. Yet the real solution to the oil crisis is not a more and more diligent search for new oil-fields; rather, it is to change our patterns of life in such a way that the demand for oil declines faster than the supply.

What is the equivalent for the church? Well, I’m not completely sure of the answer to that, but I’m pretty sure that it won’t involve holding on to the ‘sunk costs’ of the existing ‘drilling equipment’ and ‘oil-based infrastructure’. Our inherited architecture and establishment patterns of ministry may have served us well in a time of abundance; now they are simply costs that will sink us. We don’t need to keep the oil supply flowing; we don’t need to keep our extremely impressive ecclesiastical SUVs; rather, we need to learn to enjoy the riding of bicycles….

2 thoughts on “The Church of England and the Bakken Shale”