The story of Andreas Lubitz and the doomed Germanwings flight is a terrifying one. There are many details of the story yet to emerge, most especially around what may have been Lubitz’s motivation in enacting such carnage. I have been struck by the way in which steps taken to make us safer have sometimes made us more vulnerable, in that making the cockpit impregnable from the outside makes the passengers on a plane even more dependent upon the good intentions of the pilot. A good example of where good intentions can go awry and make things worse.

What seems to occupy the headline writers on the shelves of shame opposite the tobacco counter in the Co-op is the question around his ‘depression’. I do not wish in any way to question the reality of the experience that is presently given the label ‘depression’. There are phenomena that people experience within their own mental life that are often life-denying at a minimum, life-destroying as a maximum. Please do not interpret anything else that I say here as in any way denying this first and most basic truth. My issue is all to do with how these phenomena are understood and how those who have to endure them are treated, both by medical professionals and by wider society.

Firstly, I would want to ask questions about the convenience to a society that has available to it a form of language that isolates the problem within a single person. If it is established that Lubitz was ‘mentally ill’ then it substantially relieves the wider society of any responsibility for what has happened. Any questions about the social context within which a person is living, and which may contribute to their mental suffering, are side-stepped. It is simply bad luck, the misfortune of a particular genetic inheritance. Nothing to see here, move along.

In contrast I would want to insist that ‘no man is an island’ and that we cannot understand mental suffering without paying close attention both to the social context in which that suffering takes place, and to the particular life-story of the person concerned. Is the person diagnosed with a ‘mental illness’ a victim of discrimination or bullying or social isolation? Are there people in their lives who love them? Has something happened recently, such as a bereavement or divorce, that might trigger severe sadness? It is, after all, perfectly understandable that someone in such a situation would experience all the symptoms of what are presently labelled ‘depression’. Such a person is not mentally ill, they are grieving, and this is a perfectly normal and human response to a particular situation. It says a lot about our culture that the dominant psychiatric guide for dealing with such a situation has recently changed its policy so that, if someone is deeply sad for more than two weeks after a major bereavement, they can now be classed as ‘depressed’ (the ‘Diagnostic and Statistical Manual of Mental Disorders, 5th Edition’ or DSM5).

This leads directly to my second area of questions, which is to highlight the relationship between the pharmaceutical industry and the forms of diagnosis that are offered. In American Law – and the DSM5 is an American publication – it is only possible for drug companies to sell medicines for named disorders. Where those medicines are being provided by commercial enterprises, as with the American health care system, there is a strong financial incentive to increase the number of named disorders so that there are more opportunities to sell medication. This is why there has been an explosion of ‘disorders’ that can justify the sale of new pharmaceuticals. I find it significant that almost all the major pharmaceutical companies spend vastly more on the sale and marketing of their drugs than they do on researching their effects. (For more on this, read ‘Big Pharma’ by Ben Goldacre.) 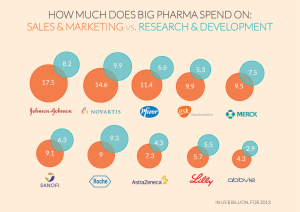 My final area of questioning is about the efficacy of anti-depressants, that is, do they actually enable a person to be cured of ‘depression’? The evidence rather suggests not. I recently read an excellent book by Irving Kirsch entitled “The Emperor’s New Drugs”, which I heartily recommend for anyone with an interest in this topic (Kirsch is a lecturer in medicine at Harvard Medical School). Kirsch’s main target is what he calls the ‘chemical imbalance theory’ of depression, and his main area of research is the comparison of anti-depressant drugs with placebos. Kirsch does not dispute that people who are given anti-depressants experience a benefit from having done so; what he disputes is that there is anything medically effective going on. That is, his case – a case that I find thoroughly persuasive – is that anti-depressants work because people expect them to work, no more and no less. Kirsch writes: “Depression is not caused by a chemical imbalance in the brain, and it is not cured by medication. Depression may not even be an illness at all. Often, it can be a normal reaction to abnormal situations. Poverty, unemployment, and the loss of loved ones can make people depressed, and these social and situational causes of depression cannot be changed by drugs.”

What concerns me about the language being used with respect to Lubitz is that it can confuse our understanding of all that led up to the crash. It is too convenient to argue that it was the result of one person who was mad or bad or both. I believe that we need to have a much more thorough conversation about what is presently called mental illness, starting from the areas of questioning that I have outlined above, to ensure that, as with locked cockpit doors, we are not simply making a bad situation worse as a result of misguided good intentions. It is also true, of course, that what is presently considered to be the preserve of psychiatrists used to be well understood as the cure of souls. I will return to exactly what that phrase means at a later date.

2 thoughts on “Of airplane crashes and anti-depressants”