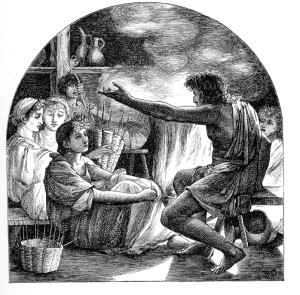 I am often asked to give reasons for believing in God. Whilst I very much honour the motivation behind the request, I feel that it is based upon a mistake and I would like to explain why.

In the 1930s the philosopher Bertrand Russell would often engage in polemical debate with representatives of the Christian churches. There was one particular debate with a Fr O’Hara that Wittgenstein listened to, after which he commented “Russell and the parsons between them have done infinite harm”.

For Wittgenstein, and for me, the problem with this sort of debate is that it turns religious belief into some sort of weak science. “The symbolism of Christianity is wonderful beyond words,” said Wittgenstein, “but when people try to make a philosophical system out of it I find it disgusting.” What he was very opposed to was any attempt to “elaborate a philosophical interpretation or defence of the Christian religion”.

In part, this was because Wittgenstein was very aware of the primitive roots that lie behind all our patterns of thought. In discussing James Frazer’s ‘Golden Bough’, which was an immensely influential work at the time, he criticised Frazer for completely lacking an historical imagination, writing that “Frazer cannot imagine a priest who is not basically an English parson of our times with all his stupidity and feebleness”.

In an academic argument, the one who can make the most reasonable and logical points can make progress. Yet that reason and logic – all reason and logic – is based upon unstated premises. The fallacy of Modern (capital M) philosophy is that it believed that reason could provide the foundation for our knowledge. Post-Modern thought is characterised by the recognition that this was a fool’s errand from the start, for (as Wittgenstein wrote) we do not acquire our most fundamental beliefs by a process of ratiocination.

We human beings actually form our understandings, first from the patterns of life into which we are born (including the language that is our mother tongue), and then from the stories that we are told from an early age. Such stories do not have to be put into books; more often they are simply told and retold as we grow and as a community develops. Our supposedly secular society is not immune to the power of stories – we are told things about science and progress, for example, that are clearly very tall stories.

Which brings me to the point that I would like to make about what it means to believe as a Christian. Our most fundamental commitments are shaped through stories, and so, to be a Christian is to have our understandings shaped by the Christian story. The most important element of that is found in the stories around Holy Week and Easter, and perhaps I shall describe them in more depth at that time of year. For now I would like to talk about the Christmas story.

It is surely one of the most familiar tales in our culture – baby Jesus born in a manger because there was no room in the inn. It is the subject of so many Christmas cards and it seems so very sweet. Yet there is much more to the story. Take, for example, the way in which Jesus is born far from home and is immediately taken to a different country as a refugee, where he has to stay for some years before his homeland is safe.

A Christian would see this as the working out of God’s providence; to put that differently, a Christian would see God as at work in, and found with, those who are refugees fleeing from political persecution. As a result of this, a Christian perspective on our present refugee crisis would suggest that God is also found there – that amongst the poor and vulnerable infants fleeing from a war zone may be found those who will be carrying out God’s will today.

When he grew up, Jesus himself said explicitly that it was not those who called him Lord who would enter the Kingdom but rather those who fed the hungry and clothed the naked – for in doing so, those who are generous will be looking after Jesus himself.

To be moved by the Christmas story in this way, to be affected by it and to then to live differently as a result, is to start to understand what it means to believe in God. Belief in God is not a matter of abstract propositions, as if God was simply the result of a magnificent equation. Belief in God is living differently according to different priorities, acting out our own stories in the light of a very much larger story, one that gives our own lives a particular weight and meaning.

Which is why, despite my own argumentative and belligerent tendencies, I don’t believe it actually helps anyone to grow in faith to come up with grand philosophical justifications for religious belief. There is certainly room for thinking about the faith, for loving God with our minds, for what has traditionally been called apologetics – yet to think that anyone can come to faith by the use of logic is, I believe, a tremendous mistake.

I would much rather talk about the King of the world being found in human form as a vulnerable baby, carried on a wing and a prayer out of the reach of evil tyrants and government apparatchiks who are ‘just doing their job’. I would rather say ubi caritas et amor, deus ibi est – that where there is love in the world, where there is compassion and mercy, forgiveness and healing, that is where God is to be found. Such things can never be demonstrated with reason and logic. We can know, understand and believe in these things only by telling our stories.

I wish you all a peaceful, joyful and holy Christmas.