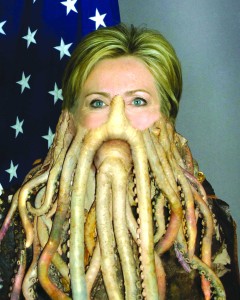 These so-called progressives do like to tie themselves up in knots. Amidst all the brouhaha about Donald Trump’s successful campaign to be a Republican candidate it seems to be taken for granted that any right-thinking individual will cast their ballot for Hillary Clinton – on the assumption that she is indeed the Democratic Candidate.

Of course, there are some progressives with an admirable commitment to their principles – they’re the ones who keep shouting ‘Bernie! Bernie! Bernie!’ – and a handful of them may well hold fast and refuse to vote for Hillary. Most though, I expect, will hold their nose and vote Democratic simply because they believe that Trump is so awful. It is for those people that I am writing.

After all, Hillary Clinton must qualify as one of the most personally corrupt candidates ever to run for public office in the United States. There are many strands to that corruption, but the most unarguable relates to her use of a private email server on which to carry out government business. That business included email transactions classified as ‘Top Secret’. The primary purpose of Clinton’s deception seems to have been to ensure that her email correspondence could avoid becoming subject to the Freedom of Information Act. Working for the government is all well and good, but anything that might jeopardise her personal income stream has to be given a priority – sod the ethics.

The Clinton’s income stream has been well documented. Of most significance for my purposes here is the amount that Clinton receives from Goldman Sachs. Goldman Sachs is the single most influential financial institution in the world. It sits at the heart of the economic and political network that makes almost all of the important financial decisions in the Western world. It has been memorably described in these words by the Rolling Stone journalist Matt Taibi: “The world’s most powerful investment bank is a great vampire squid wrapped around the face of humanity, relentlessly jamming its blood funnel into anything that smells like money.” (the full article is well worth a read – it is available on line here).

Goldman Sachs is the brain and the nervous system that supplies the governing class with their framework of values, and the public face of the government knows when to do its masters bidding. One of the most egregious examples of this came when Gordon Brown as the UK Chancellor decided to sell off 400 tonnes of our gold supply at an absurdly low cost, simply to ensure that Goldman Sachs and its friends did not lose out too much on a ‘short’ bet that had gone wrong. Brown sold the gold at a price of less than $300 an ounce – and gold is presently trading at well over $1200 an ounce – which means that Gordon Brown transferred funds from the British taxpayer to Goldman et al to the tune of some $11,574,268,776. Must be nice having friends in high places.

Which brings us back to Hillary Clinton, the face of the vampire squid. Hillary Clinton – indeed, both Clintons – are entirely part of the financial establishment. She is paid richly by the financial industry, and she earns that money by doing their bidding. In 2014 and the first three months of 2015 she earned eleven million dollars for ‘speaking’ at various functions. Goldman Sachs specifically pays Clinton more than $200,000 per hour for her ‘talks’.

Is it possible that this degree of connection between politicians and financial organisations is entirely benign and operating in the public interest? Possibly, but if you believe that I have a bridge that I would like to sell you. No, if you have any concern that our civilisation is on the wrong track, that it is too beholden to vested financial interests, that the environment is being strip-mined to generate short-term returns for shareholders, then the idea that voting for Hillary Clinton can advance that cause simply beggars belief. Voting for Hillary Clinton is a vote for maintaining the status quo, for keeping the world safe for rapacious capitalism. 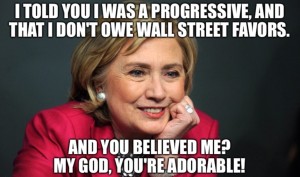 No, if the system is to be changed then a candidate needs to be elected who is not a creature of the financial system. Given the financial constraints that rest upon anyone who runs for the US Presidency, the only possible candidate is someone independently wealthy, and who can therefore criticise things like the TTIP with impunity. Someone, in short, who looks like Donald Trump.

2 thoughts on “Hillary Clinton – the face of the vampire squid”