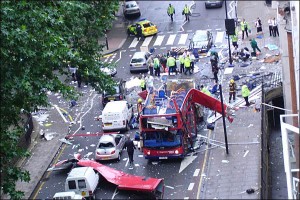 It’s about culture, not race. Whenever there is a discussion about how different people from different backgrounds might be able to co-exist, and potential problems are pointed out – like the fact that ‘co-existence’ might not be the intention of some groups – then the word ‘racism’ gets thrown out.

Racism as an insult has functioned to shut down the debate about immigration that our society really needs to have had. It does that because of the dominance of political correctness in our political conversation. Unless we can signal our virtue by repeating the necessary platitudes then society simply shuns us. (I saw a story that ran before the Brexit vote, about a civil servant that had taken unpaid leave from her post in order to actively support the Leave campaign. It was clearly indicated to her that she had committed career suicide – I hope that the referendum result has changed things for her!)

Different cultures do things differently. Some cultures encourage free speech and individual creativity; other cultures emphasise the importance of community and shared endeavour. Some cultures prohibit the eating of pork; others delight in bacon butties; others enjoy deep-fried Mars bars (allegedly).

Where there is a healthy distance between cultures, their diversity can be celebrated. Tensions arise when different cultures are required to live in close proximity one with another. At that point, where the cultures clash in significant ways, there is a significant risk of conflict. Put in summary form, if you add cultural diversity to immediate proximity then the result will be conflict.

This is what we have seen in our nation in recent decades. Enoch Powell infamously warned of the ‘rivers of blood’ that would flow from uncontrolled immigration, and that is not a bad description of London after the terrorist outrages of 7/7.

Where I very much disagree with Powell’s analysis, however, is that some groups of immigrants have been able to assimilate into our country immensely successfully, whereas others – a minority – not only have failed in the past but show no indication of succeeding at any time in the future.

So, for example, the ‘Windrush’ immigrants that came in the 1950s came from a distinctly British culture – they were, in general, English-speaking, Protestant, cricket-loving, formed within a state that had adopted British common law. Yes, they faced immense racism on their arrival (to our shame) but in many ways these immigrants were ‘more British than the British’. In other words, once the distraction of racism had been removed, their culture could be seen as profoundly compatible with what already existed here, and the new things that they brought, like reggae, could easily be absorbed.

In contrast to this are cultures with values that are inimical to classical British values, which seem to have established semi-autonomous enclaves within our cities – with horrifying consequences as in Rotherham. Some cultures contain deeply engrained misogyny; worse, that misogyny is particularly focussed on white women who are seen as legitimate targets for abuse, as their behaviour (wearing normal Western clothes) shows that they are not respectable and honourable.

It is not possible to have these two cultures co-existing in one space. In the end, one will displace the other. I would argue that if there is to be any form of healthy assimilation and co-existence between people of different cultures then there has to be an acceptance of ‘one land, one law, one language’. In other words, that if people of a different culture are to live peaceably in the ‘one land’ then the primacy of the existing law has to be paramount ‘one law’ and in order to engage with the wider society there has to be an acceptance that there is only ‘one language’ that can be used in any public forum. To accept that a different language is legitimate is to embed divisions with pernicious consequences over time.

We need, as a single British society, to be very clear about what sort of culture we wish to see affirmed and maintained in this land. The existing culture has been under sustained assaults for many decades, and the Tony Blair-led surge in immigration that has so changed the texture of British life needs to be addressed from a position of strong confidence in classic British values.

What does that look like? I am very fond of the story about Sir Charles Napier, who in the mid-nineteenth Century was the Commander-in-Chief in India. There was an Indian custom called Suttee, which required a widow to be burned alive on her dead husband’s funeral pyre. This had been banned several years before, and Napier was being petitioned by Hindu priests to allow a resumption of the practice. As recorded by his brother William, Napier said this: “Be it so. This burning of widows is your custom; prepare the funeral pile. But my nation has also a custom. When men burn women alive we hang them, and confiscate all their property. My carpenters shall therefore erect gibbets on which to hang all concerned when the widow is consumed. Let us all act according to national customs.”

This sort of robust and unapologetic assertion of British values is desperately needed in our present context. It is because we have seen such assertions as ‘in bad taste’ that we have ended up in the predicament that we are in. We need both the scope and the confidence to assert our own distinct English and British identities, in order to ensure that the dominant culture in this land is not eventually eclipsed by the present toxic and aggressive alternative.

I am also convinced that such a robust assertion of ‘Britishness’ would be welcomed by the overwhelming majority of immigrants, who quite often identify more strongly with Britain than many who have been born here. After all, they have chosen to come here as a deliberate act, rather than simply enjoying the good fortune of being born in the best place in the world. Those who hate Britain and all that it stands for are a distinct minority, but they are a minority which need to be engaged with and required to accept that we cannot have different cultures co-existing in the one space, for it can only lead to conflict. One land, one law, one language.

(A Jeremy Creake article for the Courier)

3 thoughts on “One land, one law, one language”