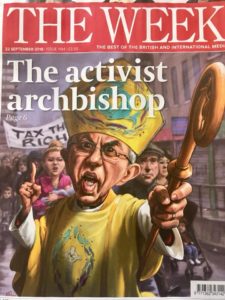 It is not uncommon for religious leaders to come under criticism when they decide to venture into contentious areas of political dispute. There have been many headlines recently about Archbishop Justin Welby, who has been recommending certain changes to our economic arrangements. My politics and those of the Archbishop are distinct but, to channel the remark often attributed to Voltaire, I disagree with what he says but would defend to the death his right to say it.

The desire to silence religious voices on political questions has many aspects, one of which is distinct to our own society. In general, those in power do not wish to be criticised so, when those in positions of religious leadership offer up criticism, they will undoubtedly be attacked for doing so by those who are either in positions of power themselves or who benefit from the status quo in other ways.

This flags up the most common form of political engagement by religious leaders in the Jewish and Christian traditions, which is that undertaken by the religious prophets. Prophecy in Scripture is often misunderstood as being centrally about predictions of a dire future. Such predictions do exist – even Jesus employs them – but they are always secondary to the principal task of the prophet which is two-fold: to call the people of Israel (and the Church) back to the right worship of God, and to call them to establish social justice, and ensure that nobody is excluded from sharing in the life of the wider community.

So there is a general truth that those in positions of political power do not like to be criticised, as it might threaten their hold upon that power. Yet there is also something distinctly English about a desire to have apolitical clergy, and it goes back to the experience of the Civil War, and the way in which religious enthusiasm took definite political form in the shape of the New Model Army and Cromwell’s abuses.

After that point, any form of religious enthusiasm was inherently suspect. The Church of England accepted a role in society which was essentially that of a neutered house pet. It received lots of grace and favour and a position of privilege, but it was prevented from the most central form of authenticity available to it, and has been unable to reproduce.

This is the legacy with which contemporary religious leaders – most especially Anglican leaders – have to deal. It isn’t simply a straightforward clash with those in power who wish to hold on to their power, and their various cheerleaders in the media and wider society. No, there is a perception still current that for an Anglican to express political opinions is simply not the done thing.

That pattern of life is slowly breaking down, as part and parcel of the way in which the whole notion of what it is to be English or British, or Christian or secular, is breaking down more broadly.

So does this mean that the Church of England needs to identify itself with one particular political party or stance? I would argue not, but with a very significant caveat. The principal reason why not is simply that faithful Christians can be found across the whole political spectrum, and what marks out the Christian point of view is not so much being left or right as recognising that their political perspectives are less important than their religious ones. Which means, to go back to the example of the prophets, not letting any ideology get in the way of submission to God – for that would be what the Bible calls idolatry. It also means being on guard, over against oneself as much as others, not to deceive ourselves about our motives, and to always seek to have a motivation which expresses love for neighbour rather than simply being a cover for our own needs, whether those be naked financial self-interest or the temptation to indulge in nationalistic or even internationalistic fantasy.

The caveat is that I don’t believe it is open to Christians to sit upon the fence when there are issues of immense political importance being decided upon. My model for this is the German theologian Dietrich Bonhoeffer who, in the 1930s, spent much time with friends in England, including the great Anglican Bishop George Bell, and who could easily have sat out the Second World War in safety in England or the United States. Instead, he chose to return to Germany in order to take part in the struggle against Hitler, eventually being executed by the Nazis for his part in the assassination plot. Shortly after returning to Germany he wrote to a friend in the United States saying, “I must live through this difficult period of our national history with the Christian people of Germany. I will have no right to participate in the reconstruction of Christian life in Germany after the war if I do not share the trials of this time with my people.”

Whenever there is a great question of public life to be decided, each Christian must resolve within their own heart and soul what it is that is God’s will. It will almost certainly not be an easy discernment, for political questions in this life by their very nature do not commonly admit to simple, coherent and complete solutions – indeed, the idea that there are such is something of an indicator that an ideology is being deployed, rather than a properly prayerful discernment.

Yet in all the discussions, as much as any political decision debated, decided and argued for, perhaps the real hallmark of a Christian perspective is the grace with which that position is held, and the capacity to listen to alternatives and find common ground with opponents. Christians are called to speak, and must not accept being excluded from the conversation, yet must also bear themselves as those who are dependent upon the virtues of another. We are the ones who do not scapegoat, who do not victimise, who do not project – for it is only through the merits of the one who received all those things from the world that we at all acceptable.