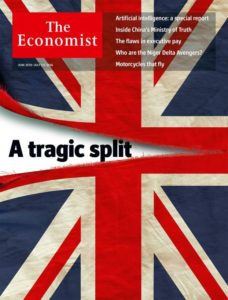 In all the chaos that currently passes for a government at this moment in time, one outcome that is becoming more probable than not – although still a very long way from being certain – is that of a second referendum on the question of Brexit. Mrs May has made such a dog’s breakfast of her Brexit strategy that very few alternative courses of action offer the remotest possibility of being successfully implemented. Hence there is a sense that our political class might show their utter lack of testicular fortitude and capacity for leadership by throwing the next decision on Brexit on to the shoulders of the voters. “Here, we can’t cope with this – you do something!”

There are so many aspects to the question of a second referendum, and so many potential dangers, but my own view on whether this might be a healthy way forward for our country resolves down to a simple issue: what question will be put to the voters? After all, the plea for a ‘People’s vote’ – because those who voted in the 2016 referendum don’t count as people – begs so many issues.

To reduce those complexities to a simple consideration, the question might be either a re-run of the first one, with a view to gaining a different result, or, alternatively, it might be a choice between Mrs May’s ‘deal’ and ‘no deal’. I believe that to pursue the first course would be catastrophic; the second might just enable us to heal as a community, and to move forward.

To address the latter first: if the question is about what sort of Brexit to pursue, then there is a clear and binary choice that can be presented to voters, which has integrity and continuity with everything that has happened up to this point. Mrs May can continue to advocate her deal as the best of all possible deals (which might be true) and those who see it as a mare’s nest of capitulation and incompetence will be liberated to argue for a much cleaner and simpler alternative of a ‘no deal’ (whilst also being open about the non-trivial costs that would likely follow such a choice).

I would see that sort of second referendum as being healthy – it would bring all our contentious disputes to a single point of decision but would also, and this is most essential, respect the integrity of the first referendum, and thus, by implication, respect all those who voted in the first referendum, including so many who had never voted before.

However, in clear contrast with that, if the second referendum is simply a re-run of the first one then the opposite applies. Let us remember that more people voted for Leave in that referendum than have ever voted for anything else in our history. To have that vote, and that decision, put to one side for reasons of administrative convenience at best would be a disastrous breach of trust. It would not solve any problems; rather, it would entrench and exacerbate all of our present disputes.

If the second referendum is simply a repeat of the first, then we are looking at a constitutional coup d’état: an issue which was, through Parliament, put to the people with a clear promise that the decision would then be implemented – that decision of the empowered people would then be overturned, along with the results of the last general election (most elected on manifesto promises to implement the referendum result) and the expressed will of the House of Commons (the votes to withdraw from the EU).

In no other realm of public activity would we accept the overturning of such a vote. Here some clarity is important. People might argue – rightly – that we overturn previous votes all the time, not least when there is a change of government following a General Election. The crucial distinction which so often seems to be missed in public discussion around a second referendum is that, in all these other contexts, the decision of the first vote is implemented before there is a second vote. So MPs are voted into office, and then take office, and subsequent votes are taken on that basis. So, with a referendum about Brexit, if the vote does not proceed from the basis that we are to leave the EU then we are looking at a major breakdown in our moral, democratic and constitutional norms.

If any second referendum contains ‘Remain’ in any shape or form as a potential option, then I believe that the only possible path which might preserve our social fabric is a widespread boycott of such a referendum, thus depriving it of political legitimacy, and affirming the legitimacy of the first referendum. To take part in such a second referendum would mean that we were, by so doing, lending that endeavour authority. We would be saying that we accepted the basis on which the question was being offered. To do so would be like saying, after a general election, that the successful MP in a constituency cannot take office until there is another election to confirm that person in office.

Such a path is inconsistent with the best of who we are. There may well be a time when it is right to put rejoining the EU to the people of the United Kingdom, at which point those in favour of such a path can argue clearly and openly for the federal future that joining the EU means – such clear and open advocacy for the federal future was, after all, notably absent from the earlier referendum on membership of the European Economic Community, and has still never gained the approval of the UK. Yet to get to that point with any integrity, and with any chance of keeping the peace of our society, it has to be done subsequent to our leaving the European Union. That is what was voted for, and that is what has to be implemented.

I very much hope that we are not presented with a second referendum which contains the possibility of nullifying the first. If we are, however, the way forward seems clear for all those who are concerned about the catastrophic damage such a strategy would cause to our society. We need to be ready to boycott the betrayal of Brexit.