I want to make a spiritual point about our present political debâcle, and I’m going to try very hard to make it in a non-contentious way, as it isn’t a particularly pro-Leave or pro-Remain point (it’s a pro-God point). 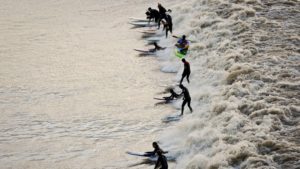 The other day we went up to Newnham early on a Friday morning to see the Severn bore, which was fascinating. I grew up on a tidal estuary, and have spent the last fifteen years on an island that gets cut off by high tides, so I am very familiar with tidal movements. Yet the bore was something surprisingly different.

What most struck me was the rapidity of change in the currents. Whilst waiting for the bore to arrive, I watched various surfers and canoeists paddling placidly downstream being propelled at a great pace by the river current. Once the bore had arrived, those very same people were being propelled at equally great pace in the opposite direction. Some particularly skilled people were able to ride the new currents and enjoy the process. Others were caught up and knocked off.

Which seems to be to be a good description of the present Westminster mess – although I am probably overstating the number of ‘particularly skilled people’ there. Whatever the rights and wrongs of Brexit, it is undoubtedly a massive political phenomenon that has radically changed the environment within which politicians work. Those who can adapt best to the new situation will be the ones that thrive in the coming years.

So why is this a pro-God point? Simply because when something this large happens, overwhelming the established consensus of the great and the good, then I think we need to use a larger language to describe it – a religious language – and to talk about ‘Acts of God’. If nothing else, it has at least shaken the confidence of our political class, and the cultivation of humility in the light of incompetence is a salutary and – potentially – spiritually beneficial thing.

I rather think that whoever is best able to navigate the new political currents stands to reap immense benefits – but such a person would need to have not just political nous but religious (spiritual/ currents) nous as well. It needs to be someone with the capacity to call upon God to lead us, rather than resting on human strength alone. I have no idea who that might be at the moment, so I’ll keep praying, for all of them, on all sides. Please do so too – they are so in need of our prayers!