It is proposed to build an Islamic centre, including a mosque, at a site in close proximity to ‘Ground Zero’ in New York.

– All sides agree that this is perfectly legal; that’s not really the issue.
– The issue is whether it is morally right or sensible for this to take place.
– Much fuss about ‘causing offence’ – I tend to think that being offended is a sin and this isn’t a solid ground for anything righteous.
– IF (and it’s a big IF) there is a desire for triumphalism behind the establishment of this centre then it should be opposed, not on grounds of it being offensive, but on the grounds that the war against the khawarij continues, and it makes no sense to gift a propaganda victory to the enemy.
– If, however, the development of the centre is straightforward and above board then I see no reason to oppose it.

My two pennies, for what they’re worth.
BTW I enjoy political cartoons – here’s some that I thought were ‘on point’: 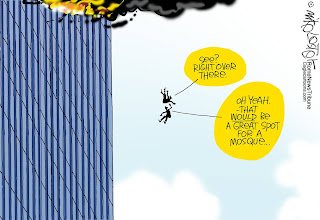 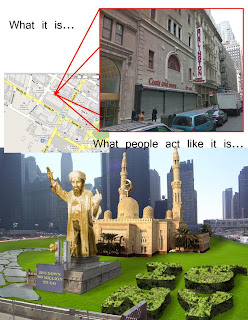 11 thoughts on “Some brief thoughts about that ‘mosque’”