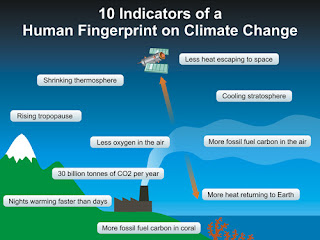 I thought this was rather good (= clear, coherent and substantiated). Links at the original article.

1. Humans are currently emitting around 30 billion tonnes of CO2 into the atmosphere (CDIAC). Of course, it could be coincidence that CO2 levels are rising so sharply at the same time so let’s look at more evidence that we’re responsible for the rise in CO2 levels.
2. When we measure the type of carbon accumulating in the atmosphere, we observe more of the type of carbon that comes from fossil fuels (Manning 2006).
3. This is corroborated by measurements of oxygen in the atmosphere. Oxygen levels are falling in line with the amount of carbon dioxide rising, just as you’d expect from fossil fuel burning which takes oxygen out of the air to create carbon dioxide (Manning 2006).
4. Further independent evidence that humans are raising CO2 levels comes from measurements of carbon found in coral records going back several centuries. These find a recent sharp rise in the type of carbon that comes from fossil fuels (Pelejero 2005).
5. So we know humans are raising CO2 levels. What’s the effect? Satellites measure less heat escaping out to space, at the particular wavelengths that CO2 absorbs heat, thus finding “direct experimental evidence for a significant increase in the Earth’s greenhouse effect”. (Harries 2001, Griggs 2004, Chen 2007).
6. If less heat is escaping to space, where is it going? Back to the Earth’s surface. Surface measurements confirm this, observing more downward infrared radiation (Philipona 2004, Wang 2009). A closer look at the downward radiation finds more heat returning at CO2 wavelengths, leading to the conclusion that “this experimental data should effectively end the argument by skeptics that no experimental evidence exists for the connection between greenhouse gas increases in the atmosphere and global warming.” (Evans 2006).
7. If an increased greenhouse effect is causing global warming, we should see certain patterns in the warming. For example, the planet should warm faster at night than during the day. This is indeed being observed (Braganza 2004, Alexander 2006).
8. Another distinctive pattern of greenhouse warming is cooling in the upper atmosphere, otherwise known as the stratosphere. This is exactly what’s happening (Jones 2003).
9. With the lower atmosphere (the troposphere) warming and the upper atmosphere (the stratophere) cooling, another consequence is the boundary between the troposphere and stratophere, otherwise known as the tropopause, should rise as a consequence of greenhouse warming. This has been observed (Santer 2003).
10. An even higher layer of the atmosphere, the ionosphere, is expected to cool and contract in response to greenhouse warming. This has been observed by satellites (Laštovi?ka 2006).

(My position is still basically as set out here though.)