Well now. Quite a year.

This time last year I wrote: “I think I will continue to become more politically engaged, although I don’t know what form that will take.”

The form it took was a surprise, and not an entirely welcome one – I’ll tell the full story on another occasion – but the process has changed me, and at some cost. I have lost friends this year, but those who have not been scandalised are more precious to me than ever. One New Year’s resolution: to see more of my friends, tried and true.

Politically I feel some small measure of pride in what the Brexit Party accomplished, and that I played a part in that. Much more fundamentally, I said yes to the vocational pressure. The passage of Scripture that was impressed upon me all this year is the story of Abraham and Isaac – and in the end, God gave me a ram. I don’t know what is going to happen next, but there are some exciting possibilities.

I still love my new job, in parish and Diocese. Being a part-timer in two jobs brings challenges, and I’m not as on top of things as I would like to be, yet I can see that coming in time, and parishioners and colleagues are lovely. The Forest is a remarkable place, and I am slowly immersing myself in it, in culture and history. Living closer to my children is a blessing.

I didn’t attend Greenbelt this year. I bought a ticket -was all set to go – yet in the end, it was at the peak of anti-Brexiteer hysteria, and I just didn’t feel safe enough (I wasn’t strong enough) to put myself in that environment. I’ll be back in 2020.

I abandoned the PhD, for a multitude of reasons, some of which have only become clear in retrospect. Academia really is a branch of Remainia. However, I did attend some important training in Rome this year, and that was satisfying and fruitful – with hopefully more fruit still to come.

I passed my motorbike test without a single blemish. I now have one of these. I use it for commuting, so have easily clocked up more than 5k in mileage. I plan to use it much more in 2020.

I published an article in the Church Times. That may have been the single most significant thing to come out of my political engagement, and the consequences are still being worked out. I hope to write more for them next year, and I have begun to work on another book: we will not evangelise England with an emaciated incarnation.

We have a puppy…

I have advised many people down the years that it is impossible to please everyone. Even though I know that to be true, it has still been a characteristic of my own nature for a very long time, probably since being severely bullied in primary school. A fear of being rejected, and of painful consequences if I became unpopular.

Well the story of 2019 is that God pushed me out of that place of safety and self-protection. It was terrifying, but I said yes to Him, and the consequences that I was afraid of came to pass. Yet here I stand. I am more at peace with myself on the inside than at any time since I began training at Westcott, possibly any time since I was ten years old. I discover that I like who I am, I like the person that God has made – not blind to the extensive flaws but more open to the benefits of what is distinctive about me. I don’t think like other people, I see things differently. I think God may have a use for that difference, and I’m looking forward to working out the consequences.

The Lord will provide. 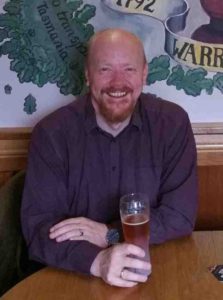