Well now, that was quite a year – some exuberantly joyful moments, some soul-crushingly dark moments, overall simply one of the most intense years of my life.

All the usual things apply – didn’t achieve all I wanted, didn’t lose weight, didn’t get fit, didn’t read as much as I wanted blah blah blah. That’s not really what I want to talk about though.

Over the last ten years I have greatly enjoyed watching and re-watching the TV series Breaking Bad, which documents the fall from grace of Walter White, a chemistry teacher who in response to a cancer diagnosis turns to the industrial production of methamphetamines to pay for his hospital bills (only in the United States of America is such a concept plausible). A pivotal moment in the story comes when Walter rejects financial support from friends. As with great literature, this choice is presented in an understandable way, and is not a wholly wrong choice, but it is at heart an assertion of Walter’s pride – and it is that pride, and the outworkings of that pride, which is the essence of the story and what I have been reflecting on in my own life.

‘Until that moment I never knew myself’ says Austen’s Emma, at the moment of crisis and anagnorisis. My last few years have been increasingly stressful – changing home and work, divorce and years of legal strife, redundancy, and the consequent correlated ill-health that one can expect from such things – and like Emma I find that these strains have increased my self-knowledge. Most especially, I have come to a greater awareness (I dare not say a full awareness) of the way in which my actions over many years have been an outworking of injured pride. I know much more about narcissism than I ever expected to.

Yet I am not Walter White, despite having identified so strongly with him in previous years. Most especially, in my darkest and most desperate moments, I have found that I have family and friends who love and support me, no matter how much of a plonker I’ve been, and from whom I have received, especially this year, remarkable blessings, practical, moral and spiritual. I am grateful to and for them.

In contrast to Walter I believe, I hope, that my experiences of breaking over the last several years – what I sometimes think of as my ‘decade of disaster’ – is ultimately becoming an experience of breaking good. The Lord is teaching me a proper humility – not an abasement, not humiliation and self-abnegation, but a sense of the truth of who I am, and a sense of who I am in the midst of a web of relationships. I find myself frightened to experience a sense of obligation towards others that have been generous towards me, and then I ponder what someone lovely said to me, “That’s what friendship is mate,” and I relax.

So I find that my journey this year has been one where the injury to my pride is being healed by a sense of gratitude, to my family and friends, and to God for never letting me go despite how far I wander from the path. There is much further for that process of healing to go, but my children are healthy, I enjoy my work, I’m actually doing my PhD (!), I have a roof over my head and food and wine on the table, I have a sabbatical next summer to look forward to, and so I am minded to say… I have found Felicity in my life

“Forgiveness is letting go of the hope for a better past” 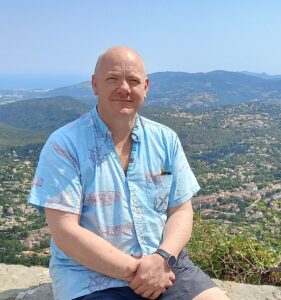