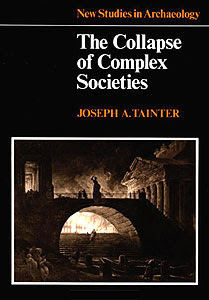 I had been meaning to read this work for quite some time, as it has quite a high reputation in peak oil circles. In particular, it has been cited directly to me in contexts where I have disputed the inevitability of the collapse of our civilisation. Now that I have read it, I can see that the high reputation is definitely deserved, although I have drawn somewhat optimistic conclusions from it. Click ‘full post’ for text.

Summary of Tainter’s argument
Tainter’s work was originally published in 1988 and has the feel of a work which is establishing a new field of study. Tainter is concerned to explore what ‘collapse’ means, when applied to a society; how collapse happens; and, in the conclusion, to draw some possible lessons for our present situation. The first chapter is a swift survey of eighteen historical examples of collapsed societies around the world, from the Harappans to the Hohokams. This serves to introduce the field that Tainter wishes to study, and also indicates the absence of rigorous empirical investigation. This is the cue for Tainter to begin his systematic analysis. He outlines what is meant by ‘collapse’, describing it as “a matter of rapid substantial decline in an established level of complexity. A society that has collapsed is suddenly smaller, less differentiated and heterogeneous, and characterised by fewer specialised parts…” Then in chapter three, Tainter surveys the explanations commonly given for why a particular society collapses, finding them all more or less deficient, and saving an especial scorn for ‘mystical explanations’ (eg Spengler or Toynbee), about which he writes: “Mystical explanations fail totally to account scientifically for collapse. They are crippled by reliance on a biological growth analogy, by value judgements, and by explanation by reference to intangibles.” In the course of this chapter he also gives a resounding declaration of the benefit of excluding value-judgements: “A scholar trained in anthropology learns early on that such valuations are scientifically inadmissible, detrimental to the cause of understanding, intellectually indefensible, and simply unfair”. This reads rather quaintly today, not least if the arguments that Robert Pirsig advances about anthropology in Lila are anywhere near being correct. However, this doesn’t really impact upon Tainter’s project.

Tainter then takes the best existing explanation for collapse (economic) and proceeds to develop a hypothesis to explain why complex societies might suddenly shift from a more complex to a less complex state. His thesis can be concisely stated: increasing complexity gives rise to diminishing marginal returns on investment; when those returns become negative, the society has a progressively diminishing capacity to withstand stress, and is vulnerable to collapse.

Essentially at point C3 there is no benefit from the increase of complexity (C3-C1) – hence the collapse from C3 to C1.

What happens is that, as a complex society initially develops, there is a very high return on investment in complexity – the resources made available through that adoption of complexity are far higher than are used up through the complex organisation itself. However, over time, the ‘low hanging fruit’ are used up, and for every increase in complexity there is a lower and lower resource return until there comes a point where simply maintaining the existing complexity has a negative impact upon available resources – in other words, the resources are more efficiently deployed through a less complex system.

Tainter gives a number of different specific and small-scale examples where this decline in marginal returns applies, for example in terms of the return on research and development investment, or medical research, but his next chapter applies the theory to understanding three different examples of collapse. The most telling example, to my mind, was that of the farmers in the latter stages of the Western Roman Empire, who were taxed more and more heavily in order to maintain the apparatus of the Roman state, and who eventually welcomed the barbarian invasions as a release from what had become Roman oppression. A Roman structure of high complexity had been viable for as long as there were increasing resources made available – and this was accomplished through conquest. However, once the limits of conquest were reached (either with the German tribes, whose relative poverty made their conquest uneconomic, or through coming up against another Empire strong enough to resist Rome, eg the Parthian) then the model of development became untenable. The accumulated resources available to Rome were drawn down, its capacity to absorb shocks to the system was eroded, and thus the collapse of that form of complexity became a matter of time. As Tainter writes, “Once a complex society enters the stage of declining marginal returns, collapse becomes a mathematical likelihood, requiring little more than sufficient passage of time to make probable an insurmountable calamity”. As a complex society enters into this terminal phase, the advantages to retreating to a previously existing level of complexity become more and more obvious, and local communities start to shift their allegiance: “…a society reaches a state where the benefits available for a level of investment are no higher than those available for some lower level…Complexity at such a point is decidedly advantageous, and the society is in danger of collapse from decomposition or external threat”. The only way to avoid a collapse is for the society to access a new resource which increases the return on investment once more.

One intriguing aspect that Tainter draws out in his closing remarks is that collapse is only possible where there is a power vacuum. That is, in a situation of conflict between states collapse does not occur, there is simply a transfer of control from one polity to another, without any diminishment in levels of complexity. However, this does mean that when collapse happens it happens systemically across several different polities simultaneously.

Comments and questions
To this lay reader Tainter’s principal conclusions seem both sound and helpful. The idea that societies collapse into lower levels of complexity as a direct result of decreasing marginal returns on investment seems plausible, robust and open to various forms of empirical investigation. How far Tainter is correct in this thesis is something that professionals in his field can take forward. My interest is with the implications for our present crisis, for it seems unarguable that our existing society has entered the realm of diminishing returns on investment (seen most clearly through peak oil) and so I end with these various comments and questions.

– There seems to be a trade off between efficiency and resilience; that is, the most efficient forms of complexity are the most susceptible to a sudden collapse. In contrast, those that are less efficient have deeper levels of resilience. (This seems a good way to describe Dmitry Orlov’s comparison of the US and USSR.);

– the theme of diminishing returns on complexity appears to explain much of contemporary politics. In the UK for example we have seen a significant increase in the resources made available from the centre for the purposes of health care. This has had either no or negative benefits upon the health of the population. It would seem that the NHS has gone past the point of optimum complexity and is now ripe for a collapse into more local arrangements. One more piece of evidence confirming that Gordon Brown’s pathological centralising tendencies are a disaster;

– more broadly Tainter’s analysis is very encouraging for all those wishing to see a relocalisation of economies, especially with regard to food supply.

– in global terms, Tainter writes that “Collapse, if and when it comes again, will be global. No longer can any individual nation collapse. World civilisation will disintegrate as a whole.” It seems unarguable that our present form of industrial civilisation will collapse; what is not clear to me is whether it makes sense to equate ‘industrial civilisation’ with ‘technically advanced and humane civilisation’. In particular there seems no reason why it should not be possible to shift to a ‘steady-state’ type of economy;

– in this context I found Stuart Staniford’s 2050 scenario fascinating. What Staniford was outlining was one way in which a new energy subsidy (solar power) might be tapped in order to maintain the existing levels of complexity. I do not see the existing levels of complexity as desirable; just as the late-Roman farmers found it in their interest to let the central structures collapse, so too might the majority of the industrialised nations find it in their interest to let the gigantic state structures, built up through the twentieth century, collapse in turn. (The Shield of Achilles is relevant to this argument.);

– I would be very interested to read an analysis of Tainter that was also informed about the nature of contemporary capitalism, especially the nature of financial instruments. Much of the discourse about economics in peak oil circles seems at best incomplete, if not ignorant (especially talk about ‘fiat’ currencies). It seems to me that capitalism is a new development of the last few centuries, and that the financial resources made available, whilst not overcoming the problems Tainter outlines, do make the outcomes very different. This could apply in two ways: the present financial crisis may be more severe as a result of financial creativity, but it also may be possible to pull up an economy by its own bootstraps in ways that were not possible before. (See here for a related book review.)

So why have I come away from Tainter with an optimistic outlook? The answer is that Tainter makes plain that the collapse of complexity is not necessarily a universal bane. On the contrary, whilst those most closely invested in the centralised structures do badly in a collapse, it is quite possible that the majority of a community will benefit, not least because for a long time leading up to a collapse the maintenance of the status quo had exacted an increasing burden upon ordinary citizens. The removal of a particular level of human complexity does not, of itself, lead to depopulation. It seems quite possible that the twenty-first century future will be local, resilient and humane, and without an over-bearing state recklessly absorbing and wasting scarce resources that prospect seems very attractive. Of course, getting to that point will likely be very scary…

1 thought on “The collapse of complex societies (Joseph Tainter)”