A post about running out of oil, and the consequences.

After reading Brian Appleyard’s comment piece on October 16 I bought a few books that came up from a browse on Amazon, and have now read two: Kenneth Deffeyes’ ‘Beyond Oil; the view from Hubbert’s Peak’, and Richard Heinberg’s ‘The Party’s Over – Oil, War and the Fate of Industrial Societies’. I have two more to read (one linking the oil crisis to wider problems, one looking at an investment strategy for when oil becomes significantly more expensive) but I think I have the gist of the issue.

This is the key point: 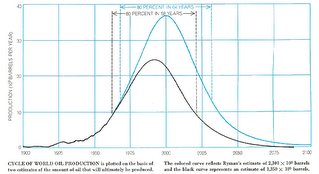 And there are good wikipedia articles here and here. As you can imagine, there’s lots of stuff on the web, which I have just begun to explore.

My reaction to the two books was very distinct. The Deffreyes’ book is very calm and considered, and Deffeyes has a very self-deprecating sense of humour which comes across well. He’s a retired professor of geology, and his book is a very thorough analysis of the geophysics of petroleum production, Hubbert’s Peak, and the viability of alternatives to oil. I had previously accepted a ‘free market’ analysis of the oil question, ie that oil will never run out, it will simply become more expensive. I am now persuaded that the reality is more complicated than that; specifically, that the consequences of ‘more expensive’ – given human nature’s tendency to short sightedness – are likely to be grave.

The Heinberg book assumes the truth of Deffeyes’ argument, and explores the wider implications for industrial society. Heinberg irritated me greatly; although I knew nothing about him before beginning to read, it rapidly became clear that he accepts a Chomsky-ish analysis of the world, whereby all ‘Rightist’ thinking is driven simply by the urge for self-aggrandisement, and this skews his analysis. For example, he has a brief discussion of money, which he argues is a ‘creation’ of central bankers representing debt – and that therefore the financial system is ultimately untenable. This is simply false. Money is two things: a store of value, and a medium of exchange. He needs to read Hernando de Soto’s book on Capital (I’ll copy in something on that which I’ve written previously for the MoQ site).

So Heinberg’s wider analysis was hampered, for me, by his stridently left-wing perspective. He didn’t seem content to marshall facts; he had to imply a moralistic rebuke to western patterns of life. I think that is for the reader to discern.

However, he did persuade me of certain points:
– oil, and to a lesser extent gas, have particularly beneficial properties as a store of energy, which cannot be replicated by other fuels, eg hydrogen (which is not a plausible energy source);
– therefore, the era of mass use of the automobile is almost certainly over (even if we all had electric cars the electricity would need to be generated, and without the fossil fuels that becomes exceptionally difficult);
– wind power is the most effective alternative;
– there is a serious question about the ‘carrying capacity’ of the earth, in terms of how many people can be supported with food, given the dependence of modern agriculture on petro-chemical products;
– there are likely to be severe and increasing ‘resource wars’ as the oil runs out over the next decade or two (or perhaps it has already started).

(He didn’t convince me that nuclear power was irrelevant; I think nuclear power could have a significant role to play in easing the transition, even if the long-term answer has to emphasise renewable energy.)

Hence the title of this post: ‘the great dislocation’. It now seems highly plausible that the political inertia and denial of the run down of oil resources will lead to a catastrophic switch to a lower energy system, rather than a smooth transition from one to the other (which, I’m optimistic, I believe would be possible if we generated sufficient political will). [NB I’m using ‘catastrophic’ there in a sense more technical than melodramatic.]

We do have time, but not a lot. It would be prudent to start setting up our lives, so far as possible, to minimise the use of oil and oil products – that’s the next thing to start exploring.

All this and I haven’t mentioned global warming….

Late addition: I also get irritated by Simon Jenkins, but this is worth reading.