So, here is a little nugget of information to start us off: “Burisma Holdings, Ukraine’s largest private gas producer, has expanded its Board of Directors by bringing on Mr. R Hunter Biden as a new director.” There are two things to note about this nugget. The first is that Mr Biden is son of the slightly more famous Vice President of the United States. The second is that this is about gas in the Ukraine.

Those of you who have been reading my columns regularly will be aware of my concern about energy supplies. With regard to oil I view the ‘Peak Oil’ case as having been thoroughly vindicated by events. The supply of ‘normal’ oil has not significantly increased since 2005, and this is the primary reason why the oil price is now sustained at over $100 a barrel, rather than the $20 per barrel that was standard when conventional opinion believed that Peak Oil was nonsense. With gas – which is the hidden factor behind all the political posturing in the Ukraine dispute – the peak will come some 20-25 years after the oil peak, and that means that there is still a great deal of money to be made, and power to be harnessed, through exercising control of gas fields.

Consider this map, and then consider what Mr Putin’s overall strategy might be in this dispute. 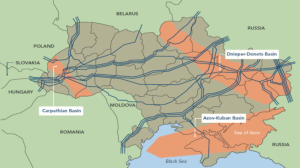 Ooh look – two large gas basins in Eastern Ukraine. I wonder how attractive to Mr Putin those might be. Senator John McCain recently described Russia as a ‘gas station with a nation-state attached’. He neglected to add the significant additional fact that this particular nation state possesses a vast number of nuclear weapons and is effectively immune to coercion.

Now over the last few years the United States has been seeking to exercise a great deal of influence within the Ukraine, and a plausible case can be made that the CIA had a hand in the overthrow of President Yanukovych, who was getting a little too close to Mr Putin for Washington’s comfort. We are, in other words, simply looking at a proxy fight for influence over the Ukraine and, therefore, over the gas supplies that are under Ukrainian territory. The fact that the son of the US Vice President is now in a key post dealing with such issues is, of course, a simple coincidence.

The question that I want to ask is: does Britain have a dog in this fight? I’m wary of saying that the Ukraine is a far away country of which we know nothing because in this modern age neither of those claims are true. Yet I’m sure I’m not the only person who is getting fed up with our government seeking to ‘exercise influence’ in world affairs when such influence only ever seems to be exercised in order to advance American interests rather than British ones.

What, after all, should a British foreign policy look like? What are the ‘British interests’ which such a foreign policy should serve? As a rough guess, something like: preserving the British people from direct foreign aggression or terrorism; ensuring a safe, stable and legal international system, so combatting piracy and so on; and finally, seeking to foster British values like fairness and tolerance wherever that might be possible, which may, in truth, be quite a rare occurrence.

If we apply that to the situation in the Ukraine, the first and most important element is clearly not applicable. There is no direct risk to British people whatever happens in the Ukraine. The second element is, in truth, rather embarrassing for the West, especially the United States, for Putin is simply following a script established by the West over the last two decades and, frankly, he is far more ruthlessly efficient at it than the empty suit presently occupying the White House. Russia has much more at stake, and it really does have a dog in this fight. Russian strategic interests are directly engaged, and the failure to take account of this is the most frighteningly culpable element of Western incompetence on the whole issue. In so far as there is a British interest it lies in there being a negotiated and peaceful outcome, which restores some legitimacy to international law and custom. My fear is that Western policy in this area is being driven by an overestimation of Western capacity and a corresponding underestimation of Russian capacity, interest and will. In other words, I believe that Putin knows that the West is not going to be able to do very much about his intentions in the Ukraine, and he is quite willing to push the situation forward until Western incompetence and impotence is fully on display for the world to see. Such an outcome would have very significant and unwelcome consequences for decades to come.

So am I arguing for some form of isolationist foreign policy? I’m certainly wary of ‘foreign entanglements’ but given our heritage and national character I can’t see isolationism as being true to who we are. I just wish that we could pay a little more attention to where we do have significant interests of our own. By way of comparison, consider the Falklands. Here we have British people who are being directly threatened by a foreign power that has attacked them militarily within living memory. This seems to me to fall clearly within the first priorities for our foreign policy; that is, we should ensure that our commitments to the Falklanders are fully resourced before we ever think about engaging with other military roles – and that includes Afghanistan and Iraq. (I’m not saying we haven’t done this – Mount Pleasant air base makes quite a difference! I am simply using the Falklands as an example of where British interests are directly at stake.)

In the Ukraine the East of the country is filled with Russian speakers who are supportive of Putin’s actions. It is much more closely analagous to the Falklands situation, where there are strong ties of culture and history, than to a form of foreign adventurism like invasions of Afghanistan. Any prudent foreign policy needs to make a stark and clear-headed assessment of the different levels of interest that nations have in any particular area. I don’t know what the right ‘solution’ to the crisis in the Ukraine will be, I only know that we need to stay the hell out of it, if we are to look after our own British interests at all.

1 thought on “Let’s stay the hell out”