A correspondent in the last issue of the Courier asked that I might consider what the strongest arguments against Christianity might be. I’m not going to answer that in this column, but I do want to write about why I think there is a mistaken assumption in the question. For I do not believe that Christianity is ultimately a matter of good arguments against bad arguments, however good I consider the arguments in favour of Christianity to be. I do not believe that it is possible to be reasoned into a Christian belief, nor do I believe it is possible to be reasoned out of it. To think that this might be the case is to place reason into a position that it is incapable of occupying, and I’d like to explore why.

The pursuit of perfect intellectual coherence is ultimately a delusion, for all our understandings are destined to be incomplete and partial. Mathematically this has been proven (by Gödel), that even the most beautifully fine tuned intellectual system must be incomplete. So, in so far as you believe that mathematics has the capacity to reflect reality then you are equally bound to accept the limits to that.

The key issue, of course, is about the initial assumptions. How do we decide the premises on which we base our thinking? If it is possible to be intellectually coherent across various diverse and contradictory belief systems, how can we choose amongst them? Well, I am rather dubious that we do so ‘choose’. In Wittgenstein’s ‘On Certainty’ he wrote “I did not get my picture of the world by satisfying myself of its correctness; nor do I have it because I am satisfied of its correctness. No: it is the inherited background against which I distinguish between true and false.” In other words, our most basic beliefs are not the product of ratiocination, of some sort of armchair based abstract theorising. Rather, all of our thinking takes place within a world view that is already given to us.

Consider how important to our beliefs is the language in which they are expressed. It is a commonplace to say that some words cannot be translated – how then can we ‘choose’ what we believe if some things simply cannot be stated within the language that we have inherited? No, the language that we speak is something given to us independently of our choice; similarly, the patterns of life into which we are formed, the habits that we depend upon to go about our daily lives, all the moral and ethical expectations that society places on us from before our birth – all these things form our ‘inherited background’. (Which is why, by the way, the baptism of infants makes sense – it is promising to establish that background rather than leaving it to the world to fill the gap – but that is another argument).

Is it possible for such an inherited background to change? Yes, it is, but it is not something that can be done purely by reason, although reason can be an immensely useful and healing tool to assist in a process of change. Rather, to change such an inherited background is more like the process of falling in love in that it is something that involves the whole of us, all of our passions and deepest concerns, and not just simply our capacity to intellectually reflect.

Possibly the most influential atheist in our intellectual tradition was David Hume, who wrote that “Reason is, and ought only to be the slave of the passions, and can never pretend to any other office than to serve and obey them.” Our beliefs change when our passions change, and our passions only change when something significant happens within our life. For our most fundamental beliefs to change, something similarly fundamental needs to have happened to our lives – a bereavement perhaps, or a personal crisis of another sort. In essence, we need to experience something for which our ‘inherited background’ way of thinking is inadequate; to put it colloquially, we need to have our minds blown by a particular event.

Such events have to involve us as fully human beings, all our passions and desires, loves and hatreds, fears and joys. The closer we come to consideration of such things, the closer we come to being able to change our inherited backgrounds. Which is why it is so essential that the humanities remain central to a civilisation, and why a proper understanding of tragedy is the foundation of all sustainable political resistance. What is most often misunderstood about Christian faith is that it is seen as being in competition with physics or chemistry, that it is offering a scientific description of the way that the world works. That is not where the centre of gravity of faith lies. Rather, the religious point of view is about the ordering of our passions, interrogating our desires in order to find the ‘one thing needful’ that puts everything else into its proper place and enables us to live life abundantly.

Let me put it like this. If you really want to understand the Christian faith, you’re better off pondering the state sponsored execution of an innocent man, and all the issues about a meaningful life that are raised by that, rather than the logical consistency of omnipotence and omniscience. Christianity is not in competition with physics. It is in competition with Sophocles and Shakespeare, or, these days (given the utter impoverishment of our culture) it is in competition with EastEnders and The X Factor. In other words, it is telling a different story about what it means to live well within the world. The great tragedians tell one story; modern soaps and reality television tell another; Christianity tells a third. We need to decide which one we actually believe in, and then live life accordingly. 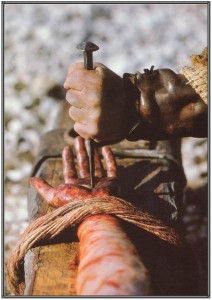