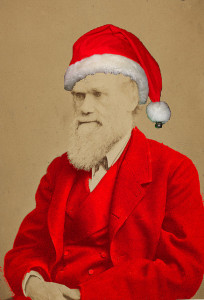 I want to take issue with the comment attributed to Christopher Hitchens by Nick Cohen in the last edition of the Courier, to the effect that ‘Jesus is Santa Claus for adults’.

What is being alleged is that the belief in Jesus held by Christians is similar to the belief in Santa Claus held by young children. That is, there is a fantasy figure who comes bestowing gifts in a hidden fashion, that the children believe because they are told the story by adults. As the children grow up, so the understanding about the nature of Santa Claus changes, and belief in the real existence of Santa Claus gives way to a shrewder understanding of parental manipulation (if you’re on the naughty list Santa won’t bring you any presents), a manipulation which those very same children then indulge in when they become parents themselves. It is something that adds to the wonder and excitement of Christmas for the children after all, so where is the harm in it?

To think of Jesus in these terms is to think of Jesus as a nice story told by the grown ups to the children in a similar fashion, a way of duping the understanding in the service of a more effective manipulation by those with a fuller knowledge of the truth. To stop thinking of Jesus in traditional Christian terms is therefore, on this analogy, akin to a child growing up and looking behind the curtain, or seeing Mummy kissing Santa Claus, or simply glimpsing presents wrapped up and hidden that later ‘inexplicably’ come down a non-existent chimney from Santa. Belief in Jesus is therefore a child-like fantasy, which no grown adult could countenance.

I want to emphasise this aspect of Hitchens’ point. Belief in Jesus is seen as a childish, a relic of a superstitious age that those with a more mature outlook on life have simply left behind. Notice that this means that, in our present society, those who do retain some belief in Jesus (still a majority of the population even now) are seen as child-like by those who have rejected such a belief, like Mr Hitchens.

I would like to describe one such example which I know quite well, which is my own. When I was a teenager at school I was a militant atheist, by which I mean I was a devotee of the writings of Richard Dawkins, most especially his excellent ‘The Blind Watchmaker’, and I used his arguments to regularly attack Christian friends. I’m pretty sure that I used the Santa Claus analogy myself. I was quite certain that I was right, that I had matured away from a childish belief in a sky-fairy, and that the march of reason was unstoppable.

What shifted my perspective was going up to university to study philosophy and theology and therefore become forced into a much more rigorous pattern of thinking. I remain grateful to one particular tutor who was immensely patient with me as I trotted out the standard Dawkins lines and in each case he pointed out the logical fallacies and absurdities associated with that position. I would add: this isn’t intellectually difficult, The God Delusion could happily be set as a first-year undergraduate set text in philosophy as it contains so many excellent examples of bad argumentation. Properly considered it would provide a very thorough grounding in how not to make a coherent case.

Put simply, when I was forced to think through an intellectual position more thoroughly than I had done so before, when I had to dig more deeply and not rely on supposedly witty soundbites like the Santa Claus reference, I discovered that what I had been rejecting all along was not Christianity as it had been understood for the best part of two thousand years. Rather it was a caricature of the faith that had become dominant in the Protestant countries of North-Western Europe as a direct result of the political and social effects of the scientific and industrial revolutions. Dawkins was simply echoing arguments first raised several hundred years previously, as Hitchens then echoed Dawkins.

How, then, is my belief that ‘Jesus is Lord’ similar to a child’s belief in Santa Claus? The real irony is that what I came to realise was that it was my understanding of science that was more like that of a child’s belief in Santa Claus. After all, it was science that had the supposedly wonderful story to tell. Here was a method that provided wonderful benefits, that was a royal road to truth, that was practiced by people who were wiser and more rational than the common person – in sum, it was science that was the dominant belief system in my mind. What a proper academic study of science did for me – and what I really wish someone like Richard Dawkins could make time for – is realising that science is a human endeavour just like any other, with benefits and costs, and which is very much prone to making mistakes.

To my mind, it is the prevalent belief in science, and the deference given to those who dispense science, which is most like the child’s belief in Santa Claus. It is a naïve understanding, and not one that can be sustained after a ‘look behind the curtain’ which marks the threshold from childishness to maturity. This is not an abstract point – lives are at stake. I will write next time of one area in our cultural life where this childish deference towards science has done immense harm to us, with a look at the pharmaceutical industry.

1 thought on ““Jesus is Santa Claus for adults””