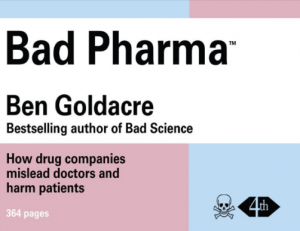 In recent years many of the insititutional pillars of society have fallen into disrespect. Politicians, obviously, but also journalism, the priesthood, the police, many others. Groups that were trusted who have now fallen from grace. Are doctors going to be next?

This is a question raised by Ben Goldacre in his extremely stimulating book ‘Bad Pharma’, which I read on holiday. Goldacre is a qualified medical doctor and psychiatrist, and presently a lecturer at Oxford. In his book, published in 2012, Goldacre sets out to show, in his words, that “Drugs are tested by the people who manufacture them, in poorly designed trials, on hopelessly small numbers of weird, unrepresentative patients, and analysed using techniques which are flawed by design, in such a way that they exaggerate the benefits of treatments. Unsurprisingly, these trials tend to produce results that favour the manufacturer. When trials throw up results that companies don’t like, they are perfectly entitled to hide them from doctors and patients, so we only ever see a distorted picture of any drug’s true effects.”

Goldacre supports these contentions throughout his book building up a detailed critique of the pharmaceutical industry and the way in which it systematically distorts the medical process at every stage. The motivations for the pharmaceutical industry to do this are quite straightforward, given that it is a multi-billion pound industry and a successful new drug can mean the difference between a company flourishing and failing. However, in pursuit of that economic end, Goldacre documents the ways in which the industry undermines the scientific process in order to make more profit. The material that Goldacre presents is utterly shocking, and if I had any residual faith in the science lying behind much modern medical and psychiatric treatment, it has certainly vanished now.

Goldacre describes one example from when he was working in General Practice, which relates to the drug Reboxetine (Edronax), which is used as an anti-depressant. He had a patient who was not improving on other drugs, and was considering using Reboxetine to see if it had a beneficial effect. He looked at the available literature which seemed positive, and agreed with his patient that it was worth trying, and duly wrote out a prescription. However, shortly after this, a review of all the research on Reboxetine was published, which for the first time included data from medical trials that had not been published (one of the main ways in which the pharmaceutical industry manipulates things is by only publishing information about trials that show their drug in a favourable light, whilst suppressing information that is critical). Goldacre writes, “I did everything a doctor is supposed to do. I read all the papers, I critically appraised them, I understood them, I discussed them with the patient and we made a decision together, based on the evidence. In the published data, reboxetine was a safe and effective drug. In reality, it was no better than a sugar pill and, worse, it does more harm than good. As a doctor, I did something that, on the balance of all the evidence, harmed my patient, simply because unflattering data was left unpublished.”

The problems that Goldacre are describing are recognised as serious problems by some influential voices. The British Medical Journal, for example, recently published an editorial written by Goldacre entitled “How medicine is broken, and how we can fix it” so there are some grounds for hope. However, very little of substance is changing, and the pharmaceutical industry continues to operate with a great deal of freedom in how it manipulates the scientific process.

What really needs to happen is that the light of public attention needs to shine on this area in a sustained and intensive way. We need to become as worked up about what is happening in pharmaceuticals as we are about all the other scandals of our time. All institutions run the risk of becoming cocooned in their own ways of thinking and patterns of life, and sometimes it takes an outsider to come along and say ‘this is simply not right’. MPs doubtless thought that claiming expenses for the draining of their moats was simply how things were done; journalists doubtless cynically accepted that phone-tapping was the way in which the truth was discovered; church hierarchies were doubtless concerned that priests accused of child abuse had to be given a chance for redemption. In the same way I believe, following Goldacre, that the medical profession needs to be told that the present practice of relying on the pharmaceutical industry as the principal guide for the benefits or otherwise that come from any particular medicine is not acceptable.

I suspect that this will be a very difficult process because there is something different about the medical profession at the moment that doesn’t apply to the other examples. In our current society, as I have said many times, “science” operates in the role that theology used to, in that it is the overarching and dominant form of knowledge, which incorporates all others. Those who are learned in this form of knowledge are the priests of our contemporary age and, in particular, those who provide forms of healing on the basis of that form of knowledge function in the modern world in a very similar fashion to ancient shamans. Sometimes the healing can be entirely ritualistic, as is most apparent when considering the difference in effectiveness between anti-depressants and placebos (sugar pills) – both have the same healing effect, which rather suggests that such healing as takes place is a product of the ritual visit to the tribal medicine man. In other words, what we are dealing with here is not a simple, practical, technical problem that can be solved by the application of sufficient determination and good will. No, here we are seeking to topple the gods of our society, and Goldacre is a blasphemer and heretic.

There are, obviously, many ways in which the pharmaceutical industry has helped the common good, and Goldacre gives credit where it is due. However, it is equally clear that the present system is broken. I would thoroughly recommend Goldacre’s book to anyone who is interested in this subject. I shall be following the ongoing conversations with great interest.

1 thought on “Do you have faith in your pills?”