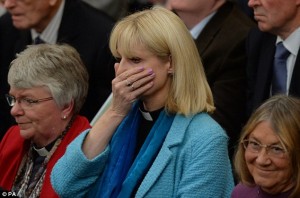 I found Martyn Percy’s article of some interest.There are many points that I sympathise with, but a more honest title for it would be ‘a handful of thoughts stretched out in order to justify a link with Martin Luther’. Please also see Ian Paul’s response, which – in the words of my pantomime character – is “harsh, but fair”.

To my mind, however, neither Percy nor Paul come close to fully engaging with the problems in the House of Bishops, and as I have just enough ego to think I have a contribution to make on this question, here follow my thoughts.

The most obvious problem is that the House of Bishops is obsessed with things that are ‘less than God’. To the popular mind those things are all related to the gender and sexual revolutions of the last few decades, matters about which Jesus spoke very little. To me, what the House of Bishops seems most obsessed with at the moment is ‘growth’, an obsession which is rooted in fear, and which does nothing to communicate the nature of God to our world.

Yet this obsession with things which are ‘less than God’ is rooted in a more profound malaise – the House of Bishops is not spiritually serious. By this I mean to say that they don’t seem to believe that the substance of Christianity is a matter of eternal life and death. The House of Bishops seems to be filled with just the same sort of social justice pleading that a liberal atheist would be perfectly at home with, with the consequence that the Bishops sound just like every other well-meaning middle class worrier.

Why would anyone put up with all the manifold nonsenses of the Church of England if there wasn’t some sense of ultimate importance embedded within?

The Bishops, in other words, seem to embody the cultural cringe that most Christians in England suffer from – that feeling when you are a reasonably intelligent and committed believer, but in mixed company refrain from mentioning anything to do with Christian faith for fear of causing offence, or, worse, being mistaken for a fundamentalist. The trouble is that the Bishops are there precisely to articulate the Christian faith in the public sphere and – surely! – to run the risk of offending when they do.

What the Bishops have failed to do is articulate a coherent narrative, not about what Christianity is in general and as a whole, but what Christianity means for the English people at this point in our national life. There is, perhaps, less of a need to talk about Jesus and more a need to talk about the implications of Jesus for the problems that we face as a single community. The Bishops of the Church of England are embedded through their establishment at the heart of the national polity – and they need to make use of this to engage with the life of the nation.

I would particularly like to hear a bishop say unequivocally that Islam is a false religion (not without any redeeming merits, but substantially falling short of the glory of God). Should that ever happen I would start to feel that the Church of England might possibly have a long-term future in this country.

What is not understood in the secular realm – which would seem to include the House of Bishops – is that religion is the principal glue that binds together a community. The atomisation and anomie of our society stem directly from the breakdown of a shared Christian faith. If the English people are to survive in a form that has recognisable continuity with what has gone before then it will do so through a renewal of its commitment to the Christian faith – albeit one that may be Anglicanism 2.0 We do have a lot of spiritual work to do.

I should make clear that I am criticising the House of Bishops as a corporate body (a principality), and I do not wish to criticise any single Bishop – the ones I have known personally all seem very impressive to me, and doing a job that I could not do. Archbishop Justin Welby especially is making a lot of the right noises – then again, he’s also wholly in favour of the managerialism that Percy (rightly) is so critical of. There have been others who seem to have been spiritually substantial, and I don’t see it as an accident that one of them, sadly soon to retire, presided over the strongest growth in a Diocese over the last twenty or so years.

Percy quotes Evelyn Underhill as saying that the people are hungry for God. This is more true than ever, as is the critique that follows implying that the Church does not provide proper food for its flock, which means that the sheep either leave or die. Yet there is another Underhill quotation of which I am fond: “The real failures, difficulties and weaknesses of the Church are spiritual and can only be remedied by spiritual effort and sacrifice […] her deepest need is a renewal, first in the clergy and through them in the laity; of the great Christian tradition of the inner life.”

The real problem with the House of Bishops is that they are not spiritually serious. The people intuit this, and thus ignore them. Would that we had a proper prophet – not the social-justice facsimile of prophecy which so many liberal thinkers champion – but one who insists on the priority of the first commandment over all else, and works out, in fear and trembling, the implications for the decisions that we face as a nation today.

Such a person could never get through the selection process to become a Bishop of course. Such is the nature of the problem we face.