The American academic Jonathan Haidt published a book called ‘The Righteous Mind’ in 2012. It performs the remarkably useful task of explaining progressive and conservative outlooks to each other.

At the heart of Haidt’s argument is that there are several different grounds for the human moral ‘sense’. In just the same way that the human sense of taste can be broken down into several different components – sweet, salt, bitter and so on – so can our sense of morality. Haidt specifically advances five different grounds on which human beings base their sense of moral judgement. These five are care, fairness, loyalty authority and sanctity. 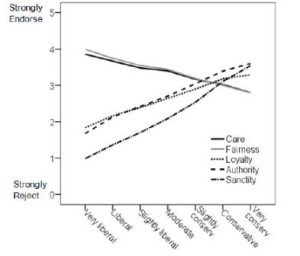 One example is the nation.

For a conservative, the nation is a focus for all three grounds of loyalty, authority and sanctity. In the case of the United Kingdom, this is centred on the Queen, to whom all public officials (authority) have to swear an oath (sanctity) of obedience (loyalty). There are equivalents in every other nation – consider how sensitive the question of ‘flag burning’ is in the United States.

However, for the progressive point of view, none of this makes much sense. These things which conservatives value are not seen as having much value at all. Unless these things impinge upon questions of care and fairness then progressives do not have much interest in them.

This difference underlies so much of our political debate, and can be seen most clearly in questions around immigration. To the progressive the most important questions are around care and fairness – how can we take care of the immigrant or refugee? What is a fair response? However, for the conservative, although those questions carry weight, there are other questions relating to loyalty, authority and sanctity. They will perceive significant harm from immigration if those entering into the nation have divergent values on these questions, and this may prove more important in coming to a decision than the questions of fairness or care.

The sadness of our time – and the great gift that Haidt’s research offers to us – is that the progressive side of the political divide, which has been dominant for many decades, simply does not see the nature of the conservative perspective. So often the arguments devolve into caricatures, that the conservative is unfeeling and heartless (ie deficient on the ‘care’ and ‘fairness’ criteria for moral judgement). The consequence that flows from denying a healthy respect and affirmation for the moral needs of authority, loyalty and sanctity is that this desire takes on darker and more destructive forms.

We are in an environment now where the progressive emphases of the last few decades are going to be subject to immense scrutiny, as the blowback from progressive over-reach comes home. We need to ensure that those benefits that have been gained are not lost by a return to an over-rigid and authoritarian affirmation of the nation. Yet we will not gain that happy medium by being terrified of all expressions of national pride. On the contrary, without a healthy sense of British national pride, we will end up being subject to unhealthy forms and much that is good would be lost.

Ultimately, we do not have to be afraid of the nation. The twentieth century did show us what happened when national identity was pursued to an evil and absurd extreme, yet it is possible for there to be an equal and opposite error – to pretend that a nation is simply an optional extra, of no significance or moral value. Such a view is dehumanising and a product of a very specific set of cultural circumstances in the modern, technocratic and rationalistic West. That excessive view is what has now reached an end point, and which will die out within the next generation. The challenge that faces us is how to manage that ending without too much collateral damage.

The task that faces us is how to affirm our sense of national identity without at the same time reverting to an authoritarian politics. I believe that we can navigate these waters successfully, but to do so we have to allow an honoured place for the moral sense about what is worth being loyal to, giving authority to, or considering sacred.

4 thoughts on “Brexit is about more than economics”