I wonder how many of you have seen the Channel 4 interview that took place between the journalist Cathy Newman and the Canadian academic psychologist Jordan Peterson. I thoroughly recommend seeking it out on YouTube if you haven’t seen it, as Peterson is a stimulating and lucid thinker. Yet what most struck me when I watched it was the remarkable lack of civility displayed by Ms Newman.

Repeatedly – and by ‘repeatedly’ I mean on at least two dozen occasions – Ms Newman appeared to listen to Peterson before then stating “What you’re saying is X”, where X is a remarkably dishonest and misleading construal of Peterson’s remarks. This is an example:

Peterson: …if you leave men and women to make their own choices you will not get equal outcome.
Newman: Right, so you’re saying that anyone who believes in equality, whether you call them feminists, call them whatever you want to call them, should basically give up, because it ain’t gonna happen.
Peterson: Only if they’re aiming at equality of outcome.
Newman: So you’re saying give people equality of opportunity, that’s fine?
Peterson: Not only fine, it’s eminently desirable for everyone, for individuals and for society.
Newman: But still women aren’t gonna make it. That’s what you’re really saying.
Peterson: It depends on your measurement techniques. They’re doing just fine in medicine… 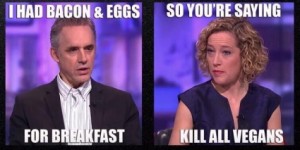 What I want to bring out here is the remarkable lack of civility that Newman brings to the discourse, compared with the abundance of civility that Peterson displays. Just imagine how the conversation would develop if, instead of Newman saying “What you’re saying is X” she simply asked “are you saying X?”

We might call this the John Humphrys-isation of our journalistic traditions, whereby the task of the journalist is no longer to dispassionately seek the truth and share that truth with their audience or readership – so, in Newman’s case, to ensure that those watching Channel 4 at that point were given a clear understanding of Peterson’s ideas – but rather the journalist believes that their task is to be an advocate for one partisan tradition over against another. When a guest is perceived to be advancing a cause antagonistic to the journalist’s own tradition then they are traduced and mis-represented, as has become so wonderfully clear in the Newman-Peterson interview. Still, at least Peterson was allowed on to the television programme in the first place. The views of the majority of the British population tend not to be given any air-time at all.

I wonder whether this is one aspect behind the popularity of costume dramas like The Crown, Downton Abbey or Howard’s End, which show the country – people like us – operating in a vastly more civilised manner. I am not simply referring to the possibilities of grace and ease that are afforded by being stupendously rich. Rather, I refer to a shared culture of acceptable behaviour that had at its core a distinctly Christian ethos of shared mutual respect – distinctively Christian as it rests upon the idea that all human beings are made in the image of God, which is one of the elements of Christianity that marks it out as different to other world-views. If a person is made in the image of God then it becomes a form of blasphemy to treat that person without respect. In Downton Abbey, this could be seen very clearly with the servants, under the benign stewardship of the Butler Mr Carson. There was a clear standard of correct behaviour which all were required to adhere to.

Is this just a form of curmudgeonly conservatism? A pining for a long-gone age of deference and a refusal to acknowledge the huge advances in human welfare of the last hundred years? I would argue not. It isn’t simply about the possibilities of polite discourse, undertaken in a shared spirit of enquiry and humility before the truth. It is rather one aspect of an overall coarsening and vulgarisation of our national character and culture which has some very stark and chastening consequences.

One that particularly alarms me relates to the welfare of our children, especially our daughters. If we consider the Ariana Grande concert in Manchester, amongst the victims of that particular terrorist atrocity were young teenage girls dressed up in ways that exaggerated their age and such secondary sexual characteristics that they might have possessed. There is a link between such display and the way in which the white girls of Rotherham were preyed upon by abusive gangs. In other words, a culture of civilisation protects the vulnerable and the innocent, whereas in the culture that we have now – which is all about assertion and aggression from both men and women – it is the vulnerable and the innocent that suffer the most. Am I the only person who thinks that something like Nickelodeon is designed to stimulate a paedophiliac culture, in Hollywood and then more widely? I worry for the stars of Stranger Things like Millie Bobby Brown, who at the age of 13 is being taken up into the Hollywood publicity machine and made-over to look much older. This is not healthy. This is not right.

I would not wish for one moment to say that there has been a previous golden age to which we must return – that’s a delusional and destructive path to choose. Yet surely there are creative ways in which we can revive the best of what has gone before, alongside all the gains that have been accrued since? A way of restoring a sense of truth, beauty and goodness to guide our common choices around ways of behaving and relating to one another?

What we have without such a shared sense is a disintegrating culture in which all civility is removed in favour of the naked struggle for power. We see the consequences every day, not least in all the arguments that continue to rattle on about Brexit. No longer are different people with different abilities united around a common aim; rather, those differences are exalted and exploited in order to service the media gods of drama and conflict.

Civility is both fragile and marvellous. We neglect its cultivation at our own peril.

5 thoughts on “The fragility of civility”