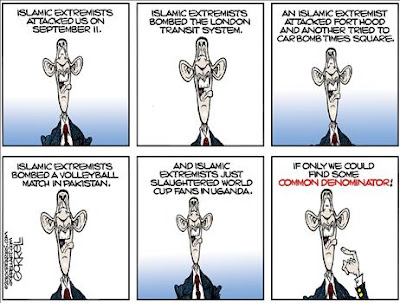 A readable book gathering together several themes in Muhammad’s life. He doesn’t come out of it too well, which isn’t surprising considering who the author is. There were a few moments when I thought Spencer was lacking in generosity, but, frankly, I think his main point is incontestable: given that Muhammed is seen in Islam as the perfect man, and to be emulated, the fact that supported mass slaughter, had a questionable approach to women and became incredibly hostile to Jews and Christians leads to a rather problematic inheritance. Spencer makes the case that what we experience today has direct and clear antecedents in the life of Muhammad himself.

Byron and I have been having a conversation about three major crises – financial, resource limits and ecological (we differ on the severity of the third). I think the cultural clash with Islam – probably focussing on Iran, and possibly involving a revolution against the house of Saud – will be a fourth world-changing element over the next ten years.

4 thoughts on “The Truth about Muhammad (Robert Spencer)”