For the first time, writing this on New Year’s Day, not New Year’s Eve!

2021 was dominated on the outside by structural things: getting divorced and being made redundant (which took effect in January). Divorce is something that I wouldn’t wish on my worst enemy, but I believe it can be a lesser evil. Some things still to be worked out, and it is by far the major remaining stress in my life, but I expect 2022 to see the end of the process.

Redundancy has been a gift from God; most especially the gifts of time and simplicity. I am so much calmer than I have been in years. Parish work is a blessing – and I hope that I have been a blessing – and it is so very different to my Mersea experience. I think it’s actually going to be possible, maybe… mostly possible(!) for me to be a priest here. Lots of work to be done, including some structural issues and the impact of Covid etc, but I am looking forward to 2022 in work terms.

I stood for General Synod! Came fourth out of eight, and just missed a place, which I thought was quite good (and I think our elected candidates are good which also helps).

I am also very much hoping – will learn in the next week or so – whether I have been accepted to do a PhD at Bristol. I have twice before tried to do a PhD (and one other time came very close to starting one) so I am very conscious of this being an arena of previous failure for me. Yet this is an itch that has persisted for thirty years, and it seems to be an auspicious time. I am most especially delighted that my hoped-for supervisor seems genuinely interested in the topic, and isn’t seeing me as a way to get the academic statistics and bureaucracies turning over! So I hope this will come to fruition, and if it does, the blog will see a lot of related output.

Other things – I’m still chipping away at my WSET Level 3, having postponed the exam twice – will now take it in March 2022 which is a year later than planned! Need to do the work…

I am more and more conscious of my deafness, and I have a nice new wireless hearing aid that I am using more and more often. Doesn’t solve every issue, but there are contexts where it really helps.

Had some excellent time with friends and family at different points in the year; I remain conscious of how much I need them and rely on them.

I have become quite unfit in the last few months, but I expect that to change quite severely over the coming year. One of the best things that has happened is that, as of now, two of my children have returned to live with me, which was unexpected and delightful in equal measure. Eldest son is something of a physical fitness enthusiast, and so I now not only have a basic gym in my garage but I have someone to push me into using it regularly! I am greatly blessed.

So I don’t know what 2022 will look like, but I’m hopeful. I’m a disabled, weight-challenged single parent in precarious employment but I’m also, for the most part, immensely peaceful and happy to be who I am.

Thanks be to God. 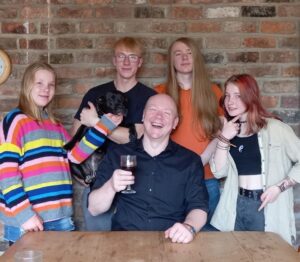