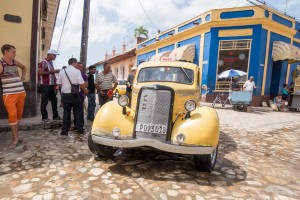 I have recently returned from a two week holiday in Cuba, a trip taken with three university friends. Some twenty years ago, soon after graduating, we were sat in the living room of the house that we shared in West London, and recognised that our carefree lives were unlikely to stay that way. We agreed that we would put a small amount of money each into a central pot – beginning with £10 a month – in order that, every ten years, we would have enough funds to take a holiday together, to renew our friendships and remember what life was like before career and family commitments took hold. Our first trip was to Mongolia in 2005; this time round it was the turn of Cuba to host our little “Self-Preservation Society” (and yes, it was after one of our regular viewings of The Italian Job that we came up with the idea).

Cuba is a fascinating country, incredibly warm and welcoming, a happy and musical people set in an incredibly green and lush environment. We started our trip in Havana, which is a remarkable city. The architecture was stunning, and it was clear that the city had been incredibly wealthy in the past. Yet it was equally clear that for most of the last fifty years that money had dwindled to effectively zero, and consequently these amazing buildings were often near-derelict. Thankfully, now that the Cuban economy is embracing tourism more thoroughly, there is a new flow of wealth which is allowing the state to slowly renew and repair the built environment in central Havana. 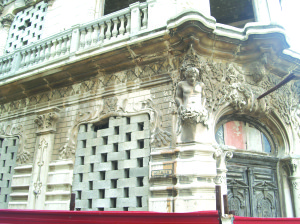 I said to my friends “There’s a sermon in that” – and yes, the necessary teasing did follow. What I had in mind was simply that I saw a parallel between the architecture in Havana and the church. Like Havana, the church has been immensely ‘wealthy’ in the past, by which I don’t just mean money but also the general affirmation of the faith shared by the community. It was a wonderful building. Yet today it is a pale shadow of what it was – it has suffered from decades of neglect. Just like the buildings in Havana, there has been nothing spent on maintenance, and now there is a desperate need for new investment in order to repair all that has gone wrong. And what does the church need to spend money on, in order to restore the building to its former grandeur? I would say simply: teaching the faith.

Back to Cuba. One of my friends has a medical condition which means that he cannot walk very far, and so he has a collapsible bike that he uses to get around, and which he brought to Cuba. Unfortunately, the day before departure his bike acquired a nasty puncture, and our first morning in Havana was then taken up with trying to find someone who might be able to repair it. After a thorough discussion with our guide, we found a small workshop at the back of garage, who agreed to repair the tyre. My friend (who now lives in Germany) was astonished to watch the craftsmanship with which the mechanic took apart the tyre and manually re-threaded the wires in order to make it robust. My friend exclaimed, “I’m going to take this back to Germany and tell them that this is how you fix things!” 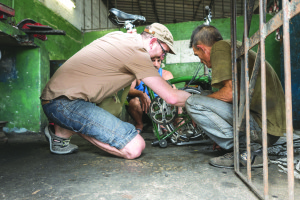 Havana is famous for all the 1950s cars that are still driven there – a snapshot of how things were before the Revolution. What this little experience brought home to us was the way in which all those old cars were kept going by some incredibly creative and imaginative engineering. The Cubans are clearly capable of making the most of anything at hand. I should add, however, that this did not extend to emissions control – the air in Havana was incredibly polluted, and I developed a hacking cough that didn’t leave me until I was back on Mersea. I’m sure it had nothing to do with the cigars…

That Revolution has clearly defined modern Cuba. I had the sense sometimes that there was very little history for the Cuban people to celebrate. What seem quite small things, such as a particular battle in the Revolutionary War, were blown up into major museums, and the people who were involved in that Revolution – most especially Che Guevara – were raised up in quite hagiographic ways, with all their personal effects treasured like Medieval relics. Of course, the tensions with the United States have only recently begun to ease. It was clear that this conflict had gone a long way to form the Cuban character, and the state had consistently reinforced a message of Cuba being an independent communist island facing off against the behemoth of a radically capitalist United States.

One striking way in which this difference manifested itself, in Havana and more widely, was the almost complete absence of advertising. The only form of acceptable advertising seemed to be revolutionary slogans alongside an image of Fidel Castro. This one, for example, has the charming slogan ‘Socialism or Death!’ 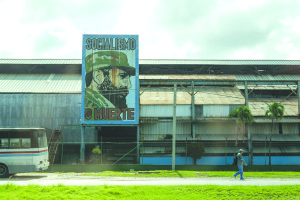 The state remains overwhelmingly present in Cuba, yet most of the population seemed very happy. In part that must be a result of the excellent health-care for which Cuba is rightly and justly famous. In part it must be a result of everyone having plenty to eat. In addition, all Cubans are educated through a national system and, charmingly, all schools have the same uniform, segregated three ways for the three levels of primary, secondary and tertiary. There were always smartly dressed children to be seen going to and fro.

I could see no trace of any racism whatsoever, and in particular, there seemed to be no sense of ‘shame’ according to different body shapes. I did wonder whether the absence of advertising, coupled with a more general equality, helped to make the Cubans so cheerful. I often saw people who might be regarded in our society as having less than ideal bodies who were clearly very much at home in them, with a strong sense of appropriate style and even ‘swagger’. This was wonderful, and I suspect not having to cope with a constant bombardment of airbrushed-perfect bodies had something to do with it. 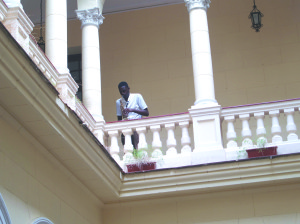 Their happiness might also have something to do with the music that was continually present. However small the restaurant it would not be long before along came a few men (with an occasional woman) with guitars and maracas and the familiar ‘Guantanamera’. For the most part we greatly enjoyed these. We had booked in to see the world famous ‘Buena Vista Social Club’ on our last night in Havana, but I have to say that we found them disappointing compared to others, especially a band that performed regularly in the bar just a little way down from our hotel, that had an amazing flautist. Yet – and perhaps this is simply the projection of a tourist – music seemed to be more deeply embedded into the rhythms of Cuban life than it does here in England. We brought several CDs back with us!

After two weeks we flew to Gatwick, having had long discussions with each other about what was going to happen with the Referendum (mine was the sole voice in favour of Brexit). We arrived back on the morning that the result was announced. I felt that whilst we as a country might have many things to learn from Cuba I was nevertheless very grateful to be back. I am as proud of this country as the Cubans are of theirs, and it felt magical to be returning from one independent island to another that had just determined to reclaim its own independence. “¡Hasta la victoria siempre!” as Che used to say. 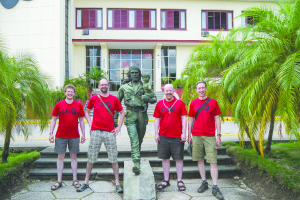 Thanks to Ian for photos