In the song ‘Armageddon Days’ by The The there is the line: “The world is on its elbows and knees, we’ve forgotten the message, and worship the creeds”. What I want to do in this article is explain why it’s a mistake to ‘worship the creeds’.

The first point to make is a simple historical one. The creed that is presently used in church services dates mostly to the fourth century AD and the Council of Nicaea, although there were still significant changes made for another 150 years or so after that. In other words, Christianity experienced its greatest success and most transformative influence upon the world before the creeds were agreed, and certainly a long way before they were ever thought of being used in worship. There is therefore no sense in which any particular creed is essential to Christianity. Creeds are not essential, but they are helpful.

Helpful in what way? Well, they are a little bit like the instructions that come with a Lego set. They are a guide to how things fit together. In just the same way that Lego instructions, if followed carefully, allow for the particular toy to be built so that it looks like the picture on the front of the box, so too do the creeds, if followed carefully, allow us to look like the ‘picture’ on our boxes; that is, they enable us to look like children of God, to look like Jesus.

The word ‘creed’, after all, comes from the Latin word ‘credo’ which means ‘I believe’. The creeds are a summation of doctrinal beliefs, the things that a particular church believes about God in general and about Jesus in particular. Doctrines, moreover, are simply the medicine for the soul that a particular church has understood. The word doctrine is related to the word doctor for a very straightforward reason. The creeds might well be understood as a sort of ‘gymnasium for the soul’. That is, once the different elements are understood and accepted, then the soul will be healed of various afflictions and then the world and the individual’s place within the world will be seen correctly.

The creeds, in other words, aim beyond themselves. They are a tool that are used to create a healthy soul. In just the same way that the Lego instructions are not what you buy Lego to play with – you buy the Lego to play with the bricks – so too the creeds are not what you become a Christian to play around with. You become a Christian in order to enjoy life in all its fullness. The creeds are a particular tool to enable that to happen. The creeds are like the proverbial finger pointing at the moon – don’t focus on the finger!

There is something distinct about Christianity in having a role for creeds in this way, as it makes Christianity vulnerable to falsification in a way that other religions are not. Christianity does make particular historical claims, in particular that Jesus lived, was tortured by the state, died and was raised on the third day. If the resurrection was demonstrably proved false then Christianity would collapse. I say ‘demonstrably proved false’ in order to try and avoid the generalised, hand-waving, scientistic ‘such things can never happen’ sort of objection. More than this, if evidence emerged to show that Jesus was simply not the sort of person that is portrayed in the gospels, if there was evidence that he was significantly immoral in some way then, again, Christianity would collapse.

Having said that, there is a a potential misunderstanding here, and I need to deploy a Wittgenstein quotation to clarify. Wittgenstein once wrote: ‘Christianity is not based on a historical truth; rather, it offers us a (historical) narrative and says: now believe! But not, believe this narrative with the belief appropriate to a historical narrative, rather: believe through thick and thin, which you can do only as a result of a life. Here you have a narrative, don’t take the same attitude to it as you take to other historical narratives! Make a quite different place in your life for it.’

To be a Christian is not simply to believe that certain things took place in history – even the demons believe, and they tremble. It is to pursue the life that those events witness to. It is to structure one’s life around what is revealed by them. To have, for example, a modern film crew with scientific support sent back in time to the third day after the crucifixion, and join St Thomas in physically inspecting the risen Jesus in such a way that all possible objections were overcome – this, of itself, would not generate Christian faith. This, of itself, would simply reveal a curious fact about the world. The leap of faith does not come here, in the believing in certain facts. No, the leap of faith comes when, in the light of what such events reveal about the nature of the world, a person chooses, for example, to take the risk of forgiving.

Which is where the really essential point about the creed becomes clear. The creeds are like Lego instructions, or a recipe for a meal, or any other particular tool. They are used for a particular purpose. Where that purpose is lost sight of and forgotten, the tools can be used for the wrong purposes, or used mistakenly. So with the creeds, whereas their original purpose is to help a particular person become more like Christ, where that spiritual aim is lost, the creeds become vulnerable to being used as a shibboleth, a way of discriminating between an ‘in-group’ and an ‘out-group’. In other words, if you’re ‘one of us’ then you will say the same things as the majority. You will be assimilated, resistance is futile and so on. They become an instrument of power, not a vessel for liberation.

This is why the song that I quoted at the beginning of the article is called ‘Armageddon Days’. Where a society has lost sight of the spiritual and has reduced human beings to more or less productive and efficient economic units, political struggle and war is not far behind. The song continues: “If the real Jesus Christ were to stand up today, He’d be gunned down cold by the CIA. For the lights that now burn brightest behind stained glass will cast the darkest shadows upon the human heart. For God didn’t build himself that throne, and God doesn’t live in Israel or Rome. God doesn’t belong to the Yankee dollar and God doesn’t plant those bombs for Hezbollah. God doesn’t even go to church, and God won’t send us down to Allah to burn. God will remind us what we already know, that the human race is about to reap what it’s sown. Islam is rising, the Christians mobilizing. The world is on its elbows and knees, it’s forgotten the message and worships the creeds. Armageddon days are here… again.” 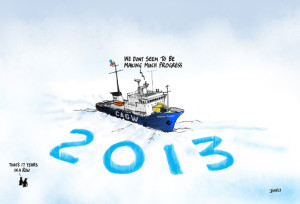 I have long thought that the green movement made a huge strategic mistake by going ‘all in’ on global warming as the goad to try to change human behaviour. Sadly, after several rounds of ‘double or quits’, even the smallest events get used against the narrative. It’s time for those who are persuaded of the reality of the Limits to Growth to accept that the political argument about global warming has been lost, for at least another generation, and try and find a more productive way to communicate important truths. Hint: it won’t involve Chris Huhne.