TL;DR: it was great… 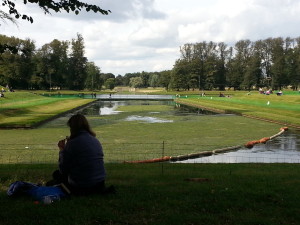 1) I think this was my seventh Greenbelt, and (obviously) the first at Boughton House, which I thought was a stunningly good venue. For me, the benefit was crystallised on the Sunday afternoon – when there wasn’t much on that I wanted to take part in – and I was able to spend an hour in the shade of a tree looking across the grounds and drink in the simplicity and beauty. The bustle of the festival was just a background hum, and it was a matter of a few minutes walk to re-engage, but that opportunity to indulge in natural refreshment was priceless and for me justified the move completely. Having said that, there are clearly teething problems with the site, and I ended up leaving the festival mid-Monday morning because of the weather and the knock-on effects on talks – and that was obviously a prudent move on my part! I’m sure those problems will get sorted though.

2) I went to more talks than last year, for various reasons. A particular highlight was when Vicky Beeching was given a spontaneous standing ovation, that was really moving (and that talk was pretty good too – I definitely will purchase Robert Song’s book). I have a new intellectual crush… 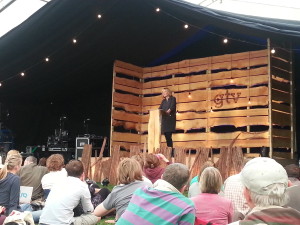 Her talks were all good, and the session on ‘Does the Church of England have a future’ was very stimulating – I might do a post entirely on that theme in the next week or two; I definitely want to do a Learning Church session on it.

3) As I have come to expect, one of the most important features of Greenbelt is catching up with old friends and making new ones, and this year didn’t disappoint. Friday night was particularly good as I had three different conversations in succession in the Jesus Arms! I am more and more conscious that Greenbelt is becoming my ‘tribe’ religiously speaking – generously Christian, but with very fuzzy boundaries; non-denominational, inclusive, curious, artistic, passionate. All things that I would like to develop more. As I despair more about the central institution of the CofE I rejoice more in the faith itself and what small groups of believers are able to accomplish together.

4) One final thought, following from that. I am sure that I am not the only person who identifies more with GB than with other Christian badges, and I wonder how far the GB leadership committee have explored the “expansion of the brand”. There are lots of hazards to this, but – especially in the light of the access problems – lots of advantages too. I’m thinking of something like taking over a hotel for a weekend and turning it into a single venue like the Pagoda – a limited number of tickets, one or two key speakers – like a conference but done according to GB principles. Have one just for CofE clergy mid-week! I think an awful lot of productive engagement would come out of such a thing.

Anyhow, loved it – not quite as much as last year, but there were particular reasons why last year worked so wonderfully for me, which will probably (hopefully!) never be repeated. I’m definitely going back next year – but I might do the glamping option… 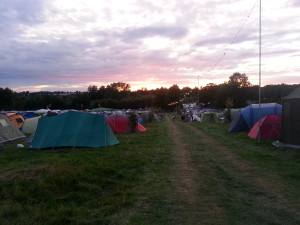 The recent pictures of the beheading of James Foley are simply the latest exemplars of the brutality that drives the Islamic State. It would appear that the executioner spoke with a British accent which must surely make us ask ourselves – what is it about our contemporary British society which is so awful that it can generate those who wish to travel to a foreign land thousands of miles away in order to take part in systematic savagery?

Let’s move past the trope that it is religion that causes this. In the contemporary secular understanding of the world, it is, of course, purely down to religion that people can be horrible to each other, but such an approach is less and less credible as time goes on. Recent research published in the three volume ‘Encyclopedia of Wars’ shows that of the 1,763 wars listed, covering all of human history, some 93% were waged for non-religious reasons. Of the remainder, more than half were driven by muslim expansion. So all the other religions combined have been responsible for less than 3% of all the wars that have ever been waged. The reflex response to the horror of James Foley’s end in our society is to blame religious ignorance – indeed, to insist that to be religious is to be ignorant – but to stay in that mindset is to abandon any hope of either genuine understanding or progress in resolving conflict.

After all, what we see on the small scale with James Foley’s murder is reproduced in societies around the world. This is the heart of darkness, about which Conrad wrote so compellingly, and which Coppola translated to effectively onto the screen. This is ‘the horror, the horror’, the element of human nature that exults in blood and death. There is a human propensity to violence, which surely has a genetic root. After all, if chimpanzee troops can engage in violent savagery against each other, why should human troops be so different – and so far as I am aware, there is no argument to say that chimpanzee violence is rooted in religious beliefs.

What seems more plausible is the notion that in the struggle for resources and reproductive fitness human biology has inherited all the instincts that lead chimpanzees to slaughter each other. When human beings are placed in a situation where there is an easy way to distinguish between one group and another, and when those groups are placed under severe pressure associated with access to scarce resources, then those human beings are highly likely to end up slaughtering each other and playing football with the decapitated heads of the enemy. Put more succcinctly, proximity + diversity + pressure = darkness.

This darkness is a potential of every human heart. Civilisation is that thin crust covering over the darkness and enabling all the higher expressions of humanity, all the things which liberal society values, such as the possibility of peaceful disagreement, respect for human rights and diversity and so on. My concern is that the taproots of civilisation, most particularly the taproots of our civilisation, have been progressively destroyed over the last few centuries, and that it is this which means that we produce young men who wish to go overseas.

After all, this darkness is a central part of the Christian world view – we call it sin, in extreme forms we call it depravity, and we say that this is an inescapable part of our nature. We all sin, we all fall short of the glory of God. If we say that we have no sin then we deceive ourselves and the truth is not in us. We have stories that talk about how sin came into the world, and stories that talk about the immediate consequences of that sin – the original murder that followed the original sin. Much more important, we also have tools that enable us to engage with, overcome and redeem that sin – to turn our hearts of darkness into hearts of light. Such tools, principally our language of forgiveness, repentance and reconciliation – all that makes for peace and builds up our common life – these are what enable creative resolutions to human conflict. Without such tools, we are doomed to repeat the biological processes of our primate cousins, with the notable difference that we are apes armed with far more powerful weapons.

The question that I wish to ask the atheist is simply: is there anything in your worldview which enables the overcoming of the heart of darkness? Clearly the existence of the heart of darkness of itself need not trouble an atheist worldview, although it shatters the complacency embedded at the centre of liberal progressivism with which atheism is often associated. My question is about what can enable the heart of darkness to be changed: what are the resources which an atheist perspective brings to the table to enable our community to engage with and overcome the darkness which explicitly proclaims its desire to destroy our civilisation?

To change a human heart requires rather more engagement than a dispassionate understanding of the world can offer. We need to engage with our emotional health, and we need to discuss questions of pride and humiliation, both in ourselves and in other cultures. We need to have an honest conversation about the bleak brokenness of human nature, what the potential triggers for murder lust might be, and what we might be enabled, as a community and society, to do about them.

Although I greatly respect the insights that evolutionary biology can offer, they cannot get us very far on the journey we need to travel. I rather suspect that pondering the story about the political execution of an innocent man on a cross can tell us more about this than all the tomes of the evolutionists put together. It is because such tales have been relegated to the category of ‘fairy stories’ that we have become culturally bankrupt, lacking the capacity to engage creatively with the crises of our time. We will only be able to make progress when the dominant secular narrative accepts a more humble role, and we once again give stories the place of primary honour in the shaping and moulding of our civilisation.

This is from the screenplay of The Dark Knight Rises

Daggett bursts in, furious. Stryver tries to placate him.

DAGGETT
How the hell did Miranda Tate get the inside track on the Wayne board?! Was she meeting with Wayne? Was she sleeping with Wayne?

STRYVER
Not that we know of –

DAGGETT
Clearly you don’t ‘know of’ anything, do you?! Where’s Bane?!

STRYVER
We told him it was urgent –

DAGGETT
Then where is the masked –

BANE (O.S.)
Speak of the devil…
Daggett turns. Bane is already there.

BANE
…and he shall appear.

DAGGETT
What the hell’s going on?

BANE
The plan is proceeding as expected.

DAGGETT
You see me running Wayne Enterprises?! (Moves towards Bane.)
Your stock exchange hit didn’t work, friend. And now you’ve got my construction crews working all hours around the city? How’s that supposed to help my company absorb Wayne’s?

BANE (TO STRYVER)
Leave us.

DAGGETT
You stay right there! I’m in charge!
Bane places a gentle hand on Daggett’s shoulder.

BANE
Do you feel in charge?
Daggett is taken aback. Stryver leaves.

BANE
And that gives you power over me?
Daggett considers the heavy hand on his shoulder. Nervous.

DAGGETT
What is this?

BANE
Your money and infrastructure have been important. Till now.

DAGGETT
What are you?

BANE
Gotham’s reckoning. Come to end the borrowed time you’ve all been living on…
Bane gently takes the terrified Daggett’s head in his hands…

DAGGETT
You are true evil…

BANE
I am necessary evil.
Stryver, on the steps outside the living room, flinches.

I think that the United States (by which I mean: the small group of profoundly naive and ignorant in the State Department guiding US policy, not the US as a people – see this) has lost its way in the world, and has placed its trust in Mammon. Whether it is Russia or China or ISIS that plays the part of ‘Gotham’s reckoning’, that moment of truth is closer every day.