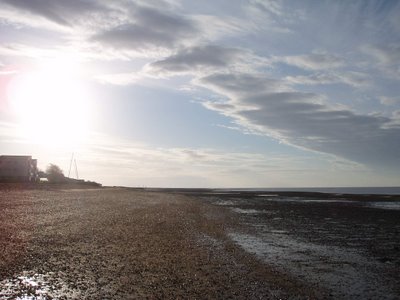 Definitely sailing season upon us: 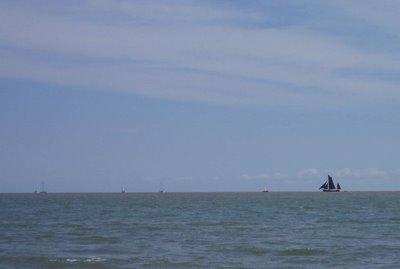 FA stands for ‘Football Association’. If you put ‘sweet’ in front of those two letters, it also stands for what that august institution knows about people-management, diplomacy and organisation.

At least Chelsea beat the Mancs…

Good learning church session, I felt, this morning – had potential to break out into open warfare at one point, I suppose that’s a good sign (grin).

Key question was about suffering, and how far it’s possible to detach oneself from it, and think it illusory. Is this real or just an illusion? (That’s a rhetorical question. I wrote my thoughts up on the question earlier (see this but it isn’t a question I think we can answer.) 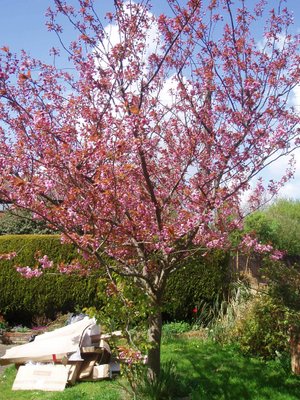 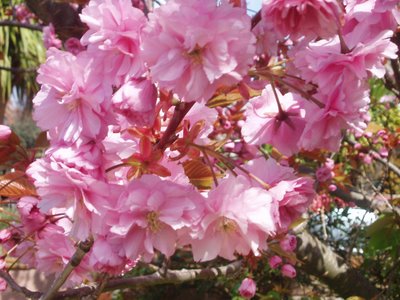 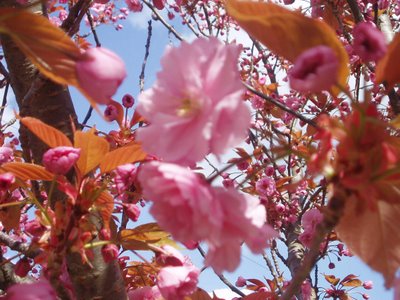 Outside my study window is a tree which I believe to be a cherry blossom (there’s never any fruit). It is something I find quite beautiful, and I’ve spent many hours contemplating it through the different seasons – normally through the study window. I thought I’d share a few piccies of it taken yesterday. 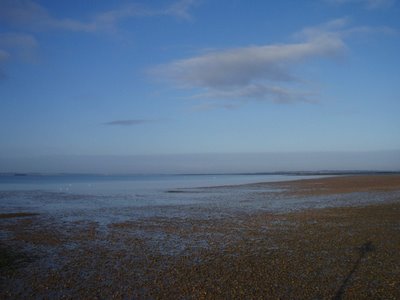 I’ve been meaning to write something about Tesco for a while, but I haven’t had a chance to do the research I need to. However, Peak Oil Debunked has a great post (it’s a very good site) covering some of the relevant material – see here. What his article doesn’t take into account is the multiplier effect, which will exacerbate many of the issues. But I’m convinced that there will still be some international trade. It’s just that it won’t be by plane (so those just-in-time vegetables won’t be transported – strawberries don’t get shipped in containers!!) and – as the article affirms – transport >within
In the meantime, this is the text of an article that I had published in the local newspaper, just trying to set the record a little straighter!
~~~
What I really think about Tesco

Now I know what it feels like to be ‘spun’ – and my sympathy for politicians has gone up hugely! The Daily Mail featured me in their pages on Friday 10 March. I had high hopes for what they might say – the interview lasted for more than an hour – but from that hour they quoted a mere two sentences of what I actually said, and placed it in the context, not only of things which I hadn’t said, but of their own desire to attack Tesco.

For the record, I am not particularly aggrieved at Tesco as such. I think they are an extremely well managed British company, and whilst I think their record on things like Fairtrade could be improved hugely, they are an exemplary company on other matters. For example, 5% of the diesel that they sell (sold as ‘normal’ diesel) is in fact derived from bio-fuels. This is a very good thing, in that it reduces the demand for fossil fuels and lessens the impact of carbon dioxide emissions on global warming. So I do not want to be part of a process that ‘demonises’ Tesco – and I certainly don’t want to say ‘Thou Shalt Not Shop at Tesco’, the words that the Daily Mail put into my mouth. I think that Christians should take seriously the questions about where their food is coming from, but I am also quite aware that, for example, for a pensioner concerned to make ends meet, cheaper food from Tesco is a tremendous blessing.

My concern remains focussed on the introduction of Tesco into West Mersea at this point in time. The simple truth is that the business model of Tesco – or of Sainsbury’s, Asda or even the Co-op – is not one that is sustainable more than about ten years into the future, at most. Supermarkets are able to retail cheap food because they are able to employ tremendous economies of scale, harvesting food resources from around the world, and delivering them to us via planes, trains and lorries. At the moment the costs of such transport are negligible, because oil is so cheap. Yet it is precisely this system that will break down in the foreseeable future – not because there won’t be oil available, but simply because the cost of that transport will be too high for people to afford – and therefore the food transported in this way will be too expensive for most people. Instead of costing the same as bottled water (what oil costs now) oil will cost the same as gold, because that more properly reflects its value to the modern way of life. At that point, when the supermarkets are no longer able to make money in the way that they have previously, we will be thrown back upon our own resources, more or less painfully, dependent on the actions that we take now. Our future is local, and the sooner we act to strengthen our local economy the better. 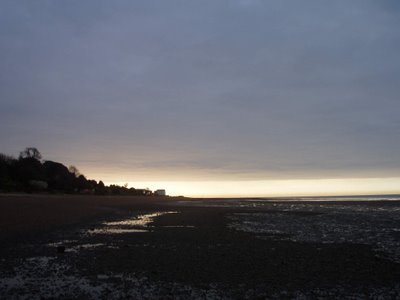 “Anglicanism is not a doctrine, creed or confession—it is a Book of Common Prayer and a remarkable dose of “common sense”…There is no way that having the Eucharist be “divisive” is part of the Anglican ethos!…I’m the Anglican here. I’m the “big tent” guy. I’m willing to be in communion with anyone who will come to the Table. I am waiting patiently, compassionately, lovingly, ready to break the bread and pass the wine. Join me if you can.”

I thought Andrew Linzey spoke much sense as well (here) “Not all truth is given in the past; the Spirit has something to teach us in the present. It is untrinitarian consistently to oppose God’s work in the past to what we may learn here and now. All innovations should be tested, but it is a mistake to assume that all development is infidelity.”

The right way forward is not clear to me – my opinions haven’t really changed much – but one element of my thinking is hardening, and was expressed by Bradley (first link above). I don’t believe in a communion of the pure and sinless – I believe in a communion of the sinful, for that is the only place where I might hope to receive. That’s what I think Anglicanism asserts, and asserts strongly, and I think it is one of the ways in which it is most true to Christ’s own example and teaching.

The pure church doctrine is a heresy, it always has been. We need to be robust about saying that.

Much muttering in the blogosphere about believing in the resurrection (see here where I came across it first, and also here.)

But I >also
This is on my mind a lot at the moment because this Sunday sees the launch of a discipleship campaign in the largest parish (to be followed in the other parishes during the year) and the theme I’m going to be discussing is ‘what does it mean to be a witness to the resurrection’ – the texts being Acts 3.15 and Luke 24.48. I’ll probably also mention the Greek for ‘witness’…

I don’t think it’s possible to be a Christian without believing in the resurrection, but it’s even more crucial to live out a life “in the light of the resurrection” – and I think that this is possible even if the mental assent is lacking to a particular conceptual framework. Let me unpack that a bit.

I don’t believe that what we say matters so much as the orientation of our life (“It’s not those who say ‘Lord, Lord'” etc, plus a Wittgensteinian account of language). In other words, it is the shape of our lives – their motivations and priorities, and how that works out in actual existence – that is important in the sight of God. There is a way of life that is governed – initiated into existence – by the resurrection, which is characterised by love, joy, peace, gentleness, self-control and so on, but most of all by forgiveness. To forgive, to make forgiveness (and refusal to judge or condemn) a central aspect of life is, for me, what it means to be orthodox, what it means to really believe in the resurrection. That’s why I’m convinced that Gandhi was “saved” even though he denied the priority of Christ. He lived out the Sermon on the Mount, and that is what Christ himself says is necessary.

The alternative is precisely an ‘honouring with lips’ though the heart is far from God. It is the shape of life – our deeds – that matter in the sight of God, not that we can ‘achieve’ salvation (that argument is such a distraction) but that God cares about the concrete and the everyday, not the abstract and ethereal. It is, to put it slightly differently, to give more authority to the Old Testament than to the intellectual presuppositions of Modern Protestantism.

There is a shape of life which is orthodox, which is holy, which is fruitful; which is brought into being by the incarnation, confirmed by the resurrection, and sustained by the Spirit of forgiveness that descended at Pentecost. The church’s vocation is to live out that life. Not to achieve merit, but to sing in thanksgiving (eucharist). It is the only real life – life in abundance.

Hey, I got tagged (by the Ranter).

Accent: slightly posh Estuary English
Booze: wine, port, gin and tonic, real ale (alcohol is my principal vice)
Chore I Hate: putting out the rubbish on a Monday morning
Dog or Cat: Ollie!
Essential Electronics: Palm LifeDrive (there are others, but that’s the really essential one)
Favorite Cologne(s): Obsession, although I very rarely use it
Gold or Silver: Gold; I’ve made a nice little profit already this year 🙂
Hometown: don’t really have one; home ‘place’ is the Blackwater Estuary, both in the past and now in the present
Insomnia: yes
Job Title: Rector of West with East Mersea and Priest in Charge of Peldon and the Wigboroughs; Warden of Ordinands.
Kids: two boys.
Living arrangements: possibly the best Rectory in the county.
Most admirable trait: Who am I to say? Probably loyalty.
Number of sexual partners: what, now or in the past? The answer to the first is obvious, the answer to the second is ‘none of your business’ 😉
Overnight hospital stays: rare
Phobias: being trapped in a small confined space; something bad happening to my kids
Quote: “Practice gives the words their sense” (Wittgenstein)
Religion: Ha! See my job title
Siblings: One elder brother, who runs this company
Time I wake up: 6am (although it was nearer 4am twice this week!)
Unusual talent or skill: I have remarkably flexible toes, and I can make strange shapes with my tongue
Vegetable I refuse to eat: celery and sweetcorn
Worst habit: not finishing the details of projects
X-rays: most recent was of teeth (routine)
Yummy foods I make: vegetarian lasagne
Zodiac sign: Leo (Sun Leo conj Mars, trine Moon in Aries and MidHeaven in Sagittarius; opp Asc in Aquarius, square Neptune in 10th House Scorpio (priesthood) and square Saturn in Taurus. In other words: a bottled up volcano. If you believe that sort of thing.)

I tag Psybertron, who never accepts a tag (tho’ in fairness he’s probably a little distracted by moving across continents 😉