I ask because it seems that there is a consistent pattern of people seeking one outcome and by their actions precipitating precisely the opposite outcome.

It begins with David Cameron seeking to lance the boil of Conservative divisions over Europe by calling the EU referendum, the result of which has been to bring the Conservative party to the brink of a formal split.

It then moves to Gina Miller, who took the government to court, insisting that Parliament had to be involved in invoking the Article 50 procedure for leaving the EU. As a result of this, the departure from the EU is much more thoroughly embedded than if it had simply been a matter of government fiat.

Then there is Theresa May herself, who called an early general election when supremely ahead in the polls, but whose disastrous campaign leadership led to the elimination of her majority.

What of the ERG? By bringing about a no-confidence vote in her leadership, they have ensured that Theresa May is untouchable through the most crucial months of decision making.

What about Michael Gove’s stabbing of Boris Johnson? Might fit…

I just have this suspicion that when the tectonic plates of politics start to shift there is very little that individual actions can do to prevent a particular outcome. It’s rather like one stevedore on the dockside valiantly holding on to a rope whilst the cruise liner starts to motor in the opposite direction. Or… 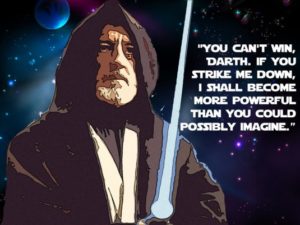 So that is my musing about Brexit at the moment – there is nothing that can be done to stop it, there are far greater forces at work than we seem to be aware of, and God has a plan.

But what is really going to bake your noodle is that all the above is UK-centric. The envoys of the Commission are intent on punishing the UK and making an example of us, in order to ensure that the EU is strengthened and sustained on its path to becoming a single state.

Time to start counting the days until the existing EU has collapsed then. I give it less than three years.