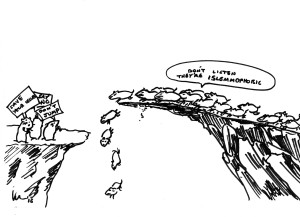 One of my favourite jokes is: a hundred thousand lemmings can’t be wrong! I like it because it is absurd, it is closely related to a philosophical type of argument called a reductio ad absurdum, and I like it because – once the requisite irony of the delivery is appreciated – it contains an immense and important truth.

That truth is simply this: just because everyone you know agrees with you, that doesn’t mean that you are right. You might simply be joining in with a crowd of small mammals joyfully committing suicide by jumping off a cliff, in obedience to long-defunct biological imperatives.

The interesting thing happens when a lemming realises that they are in fact a human being and stop and say ‘is this really the way that we want to go?’ (Doubtless many will say that this is a good metaphor for Brexit – that by deciding to leave the European Union the British population have decided to jump off a cliff, and the result will be messy and bloody. That is the sort of comforting lie that we tell ourselves when reality becomes too painful to be coped with immediately.)

After all, what 2016 has demonstrated, on both sides of the Atlantic, is that those in positions of power and authority and influence do not have any clue what is going on. They have manipulated the levers of power in order to maintain the status quo, in order to ensure that the world remains safe for global corporate capitalism, and yet the results have not reflected their choices.

I would say: the bubble within which they have been operating has finally burst. That bubble, that echo-chamber, that closed circuit has been dominant for many decades. It has been marked, as all religions are marked, by clearly expected standards of speech and behaviour, with shibboleths relating to the treatment of minorities and women, where transgressions lead to expulsion from the community.

What has happened this year is that the illusion of dominance and inevitable victory for that religious perspective has been shattered. The world does not operate according to the central tenets of political correctness. There are people whose suffering was not taken account of by that dominant ideology, and their numbers – of those who suffer and those who care about those who suffer – are now large enough to cause electoral earthquakes.

Earthquakes that were not seen; at least, not seen by those who have relied upon the official prognosticators and opinion formers and tea-leaf readers commonly known as pollsters. Why not? Simply because, as mentioned above, if you believe something that falls outside of the bubble then the bubble will react angrily and aggressively against you. You will be bullied at escalating levels of intensity until you repent of your transgressive thoughts. You might lose your job; you will at least lose some friends. In this sort of environment is it surprising that people keep their views to themselves until that one private space wherein their preferences might actually have some impact?

The reason why the bubble has burst, why the illusions have shattered, why the genie will never get back into the bottle is that all those of us on the outside of the bubble, who have watched the creeping madness and group-think take over and destroy so much of virtue and value in Western society – we now know that we are not alone. On the contrary, we have the momentum, we have the numbers, we have reality on our side. We refuse to go over the cliff.

Such language might alarm. Does this mean that we are going to watch a replay of the 1930s, with Trump as Hitler, and Farage as his bag-carrier? No, it really doesn’t – and the dominance of that narrative simply shows what the principal factors were which formed the politically correct bubble in the first place. These are the long-defunct biological imperatives that are driving the lemmings over their cliff. Put simply, the West was so traumatised by the experience of the Third Reich that it has chosen to do everything possible to prevent a recurrence, up to and including cultural suicide.

The paradox is that there is an ideology abroad today which has very clear and direct philosophical and cultural links with the Third Reich, which insists upon traditional roles for women, which is radically anti-semitic and excludes ethnic minorities from all positions of power and influence, which prescribes the death penalty for homosexuality, and which is committed to the path of violence and terrorism in order to pursue those objectives.

It is because more and more people are aware of the threat that this ideology poses to us that the bubble has burst. The bubble has prevented a full and vigorous engagement with the threat; it has instead acted to incubate the threat within our own society; and people have had enough.

Yes, there are direct economic interests in play as well. The promises of the bubble have not been kept; whole communities have been cut off from any increase in prosperity – rather the reverse; and all the while the spectacle of fat cats filleting their company’s pension systems before pushing their employees over a financial cliff has fostered the disaffection that is now too obvious to ignore.

This crisis has been decades in the making, and will take many years yet to fully unravel. It will not be a gentle time. What are our tasks for the months and years ahead?

Those of us who have been outside the bubble for some time have, I believe, to ponder one essential question: how can we remain civilised in the context of the coming conflict? To put that slightly differently, and more personally, how can we remain Christian and not succumb to Nazism? How can we insist upon the priority of one form of life in this nation – one that actually does preserve all the progressive achievements of our culture – without scapegoating a minority? On that question will this generation be judged.

For those who have been within the bubble, I am bold to offer some advice. The first and most important advice is simply: don’t assume that those who disagree with your views are racist, homophobic, sexist reprobates. That has been the default assumption for so long that those words have lost their power in the same way that they have lost their accuracy. If you reflexively reach for those insults in discussion with Brexiters and Trumpers then you simply commit yourselves to leaping from the cliff with greater conviction.

The second bit of advice is simply: listen. Those of us outside the bubble don’t have all the answers, and if we are to preserve a civilised society in this land then the polarisation of argument is not going to help us achieve that end. We have to work together. Yet that cannot happen if one side believes that the other is morally beyond the pale, an incarnation of barbarism, a return to fascism. No, we need you to listen. We need you to recognise that the bubble has burst, that there might be truth outside your world-view, and that a little humility on your part would go a very long way.

If this does not happen; if bubble-dwellers double-down on the rightness of their perspective; if they continue to turn towards violence and anti-democratic methods in order to insist upon the rectitude of cliff-leaping – then, in that case, I am gravely concerned for the future of our country and our civilisation. The stakes here are very high, and it is the lack of awareness of those stakes that seems to me to most characteristic of the bubble.

We have a future to build, a future which may yet be much better than what has been before. If we want that future to be bright, we are going to have to build it together, outside the bubble.