I forgot to reference this a while back when I first came across it. All human life is here, and your heart will break.

In my wanderings around the internet recently I came across this: Prophet of Doom.

It’s written by a fundamentalist Christian, so I take it with a pinch of salt – well, a cellarful actually – but he says something about Mohammed which took me completely by surprise and which I would like to discover the truth about. He quotes ‘Tabari’ (apparently one of the ‘great’ authorities on Islam) IX:131

“My mother came to me while I was being swung on a swing between two branches and got me down. My nurse took over and wiped my face with some water and started leading me. When I was at the door she stopped so I could catch my breath. I was brought in while Muhammad was sitting on a bed in our house. My mother made me sit on his lap. The other men and women got up and left. The Prophet consummated his marriage with me in my house when I was nine years old.”

I thought I was reasonably well informed about Mohammed – I’ve read, eg, Maxim Rodinson’s biography, Karen Armstrong’s History of Islam, and a few other books (and completed a term’s course on Islam as part of my training). But I hadn’t come across this.

I just can’t get over the distance between this and Jesus. Mohammed seems closer to King David, to put it no more harshly. Better shut up before I say something more controversial.

“I am just an egg” is a reference to Robert Heinlein’s ‘Stranger in a Strange Land’.

“Travelling outside of karma” is a reference to a song by U2.

I thought I’d say something about the words beneath my profile, ie “The truth will set you free” and “Spider Jerusalem is my hero”. Well, the first should be an obvious reference for most readers, and it encapsulates how I understand my faith. But the second may need a little explanation…

Apparently comic book superheroes have replaced the different gods of previous mythologies. Where once the imagination of a child was filled with stories of Hercules, now they have Spiderman. Seems plausible to me. 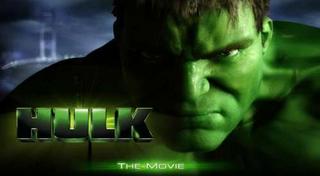 Then when I stretched into the teenage years, Wolverine took over – he was a sharper character: 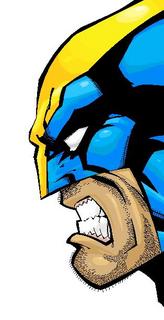 And then when I was in my twenties Frank Miller’s Batman was the one I resonated with: 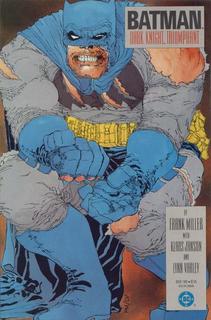 Two things. The first is that what strikes me now is how angry I was. Just look at the expressions on their faces. Rage. I think a lot of men (boys) have that rage, which is why comics are so popular in certain quarters. It might do the world some good to ponder the roots of that rage. But second, the most interesting ‘comic book’ hero that I identify with now is a man called Spider Jerusalem, from Warren Ellis’ series called Transmetropolitan. 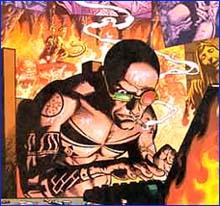 Now, a word of warning – this is not for the squeamish, and probably shouldn’t be read by anyone who considers themselves a Christian – it’s rude, lewd, frequently blasphemous and obscene, and frankly I’m worried about myself for enjoying it so much. But I enjoy it because it is laugh-out-loud funny and I think Spider represents something essential about humanity – he’s awful, but he’s dedicated to the truth. And I think that’s important. He is redeemed by his acceptance of the truth. I suspect that applies to me too.

The thing is, he’s a tremendously angry man. His column in the newspaper/blog is “I hate it here” and the one consistent thing that drives him is his rage against the world. But his rage has a productive outlet – blog articles which expose the powers that be.

I’m not there yet.

That’s what heroes are for aren’t they? – they represent those bits of you that seek expression, and the worship of the hero is what enables those bits of yourself to articulate themselves and, hopefully, come out. (Which is why Christ is the ultimate hero who can’t be replaced – but that’s another post).

This is Spider’s philosophy:

“Let me tell you how it is going to be.

I am free to write what I want, when I want. And you have to come to me to read me.

This is not the same deal as picking up a newspaper for the sports and the TV listings and getting a piece of me too.

You actually have to sit down and poke your feedsite reader and come to me.

What I won’t do is bullshit you.”

I think that’s the only promise a blogger should make. And I shall try very hard to live up to it.

I love this blog: Waiter Rant

You scored as Sacrament model. Your model of the church is Sacrament. The church is the effective sign of the revelation that is the person of Jesus Christ. Christians are transformed by Christ and then become a beacon of Christ wherever they go. This model has a remarkable capacity for integrating other models of the church.

What is your model of the church? [Dulles]
created with QuizFarm.com

We had our confirmation service last night. The Bishop came and presided; the church was full; the choir were in good voice and sang the Vicar of Dibley setting for Psalm 23; and five people, ranging in age from 16 to 63 stood up and pledged themselves to Christ.

It is one of the greatest privileges in the ministry to accompany people on the journey of faith, and to make, in some small way, a difference. To share the faith, and to watch someone come to understand what it means – and, as a result, for them to find a deeper and fuller life – this is what I am called to do. I gave each of them a copy of James Alison’s ‘Knowing Jesus’: sustenance now that the classes have stopped.

And with their confirmation I find that I too am confirmed in my vocation.

Here I am, Lord. Is it I, Lord?
I have heard you calling in the night.
I will go, Lord, if you lead me.
I will hold your people in my heart.

Is this your faith? This is my faith.

Shortly after my 16th birthday I started my sixth form, where one of my ‘A’ Levels was Economics. At the first lesson the tutor suggested that we read ‘The Economist’ regularly, and, having an interest in such things, I followed his advice. And it must have been good advice, as I won various economics prizes and did rather well in my final exams.

Now, nineteen years later, having read virtually every Economist published since then, I have decided to stop. This week my subscription ran out, and I am not going to renew it. Let it be known that the last words of the Economist that I read were in the obituary of Ted Heath – a suitably downbeat conclusion.

It’s not as if I have become disillusioned with the Economist’s political slant (libertarian and secular) or its quality of writing (always good, with pleasingly dry wit) and it’s not a question of money either. I’m simply trying to make room in my life for new things.

Having been, in particular, a political junkie for most of my life, I am wanting to move away from a concern for political details, and spend more time exploring literature.

A few years ago I started reading the TLS (Times Literary Supplement). So far it has played second fiddle to the Economist, but no longer. Which means that the stack of unread TLS’s by my bed, going back to April 1 of this year, will now get worked through.

And I have also just subscribed to Decanter. So there we have a change of taste – from political economy, to fine writing and wine. And perhaps… a little more writing of words by myself, and a little less reading.

It’s all their fault. They’re evil. I don’t want anything to do with them. They’re a disgrace, a wicked bunch. That lot over there. Whatever else is true IT’S ALL THEIR FAULT.

Them and us language. Something we’re all prone to, and sometimes the temptation to use it is overwhelming. And the people who qualify as THEM can be tremendously diverse. At the moment it’s young muslim men with rucksacks on their back. At other times it was the Germans or the French, or homosexuals, or women, or Jews, or blacks. In the seventeenth century in this country, it was Papists and Puritans, nowadays the language in religious circles is that of ‘fundamentalists’ or ‘liberals’ – IT’S ALL THEIR FAULT.

Each time the identity of the majority was supported and expressed by identifying a ‘them’ against which the ‘us’ could be established. Because WE are not evil, WE are not a disgrace, WE are righteous, WE are the chosen people, God is on our side and WE shall triumph.

Christ came to put an end to all that. The masters of them and us language in Jesus’ time were the Pharisees, and that was precisely why Jesus fought against them all the time. It was the righteous WE who crucified Jesus, because Jesus consistently identified himself with THEM. He broke bread with THEM and welcomed THEM into His Kingdom. And WE were offended.

If we are to keep faith with our Lord, we must always be on our guard against this language of them and us, and whenever we see it being used, we must remember that the path of Christ is to walk with THEM, even unto the cross.

For God is not on our side. He’s not on their side either. He wants us to stop playing the game of them and us.

The Father knocks on my door,
Seeking a home for his Son.

Rent is cheap, I say.

I’m not sure I want to sell,
But you might come in to look around.

I think I will, says God.

I might let you have a room or two.

I like it, says God. I’ll take the two. You might decide to give me more some day. I can wait, says God.

I’d like to give you more, but it’s a bit difficult.
I need some space for me.

Hmm. Maybe I can let you have another room.
I really don’t need that much.

Thanks, says God. I’ll take it. I like what I see.

I’d like to give you the whole house, but I’m not sure.

Think on it, says God; I would not put you out.
Your house would be mine and my son would live in it.
You’d have more space than you’ve ever had before.

I don’t understand at all.

I know, says God, but I can’t tell you about that.
You have to discover it for yourself.
That can only happen if you let me have the whole house.

I can wait, says God. I like what I see.