I finally managed to watch ‘Inside Job’ yesterday, which I thought was outstandingly good. The first half of this video gives a flavour.

One of my formative philosophical influences – and I can say that without being pretentious because I was about 17 when I read it, and pretention is expected at that age – was Albert Camus’ ‘The Rebel’, most especially the first few pages. These describe the reaction of a slave who has simply taken too much abuse and turns round to say ‘No’. From that refusal comes a sense of value and a sense of self – and these are the building blocks for creating something new. This is the primal reaction from which all else comes. Camus writes “An awakening of conscience, no matter how confused it may be, develops from any act of rebellion and is represented by the sudden realisation that something exists with which the rebel can identify himself…”

I’ve been pondering this whilst following the events outside St Paul’s. There has been much criticism of the Occupy movement for not having ‘clear goals’ (on which see this great cartoon). That is immediately to try and force the rebellion to conform to the dominant discourse, to be co-opted into the patterns that pose no threat to the establishment. Specific claims will, I do not doubt, follow in due course. For now, however, it is enough for there to be the protest, the rebellion – the saying ‘No’ to manifest injustice, arrogance, ignorance and greed.

So what of St Paul’s at this time? I can’t be the only one who is dubious about the ‘Health and Safety’ rationale for closing the cathedral, not least because those grounds have not been clearly communicated to the Occupiers, who are therefore prevented from being able to take action in response to allay the concerns. Clearly it is a way of trying to bring moral pressure upon the protesters to get them to move along and not cause such bother. Yet if I’m right about the rebellion being the ‘awakening of conscience’ then the cathedral authorities are lining up on the wrong side of the divide – their moral pressure is simply an expression of convention rather than a receptivity to the right. In Camus’ terms they are embodying the abuser, metaphorically and literally. What I find most intriguing is that the Occupy actions have inadvertently put the spotlight onto the national church, rather than causing immediate difficulties to the financial institutions. What are the real values that guide the Church of England? With whom shall we stand? At the moment, sadly, it looks as if the Church is simply another element of the governing class, an Erastian placeholder cavilling at those protesting wickedness because it is simply not the done thing. Will the Church ever get to a point where it can say to the establishment ‘thus far and no further’? It would return to the Church that sense of value and sense of self which is conspicuous by its absence. I believe that it is what the people of this country are in fact looking for – the Occupiers not least among them.

(In the meantime plaudits and kudos to Kathryn Rose for following where the Spirit leads!)

Tim commented on my post last week that he didn’t know what the faculty process was. The faculty process is essentially the church equivalent of gaining planning consent. If you want to build an extension on the back of your house (in the UK) then you need to get approval for that from the planning department. If you don’t get that consent (which can be voted on by the council) then the council has the power to remove such an extension (this was the principal issue at stake at Dale Farm).

In principle, the faculty process does make sense. There are some ‘de minimis‘ regulations which mean that minor changes don’t need a faculty, and there is, in theory, a clear procedure set out for how to obtain a faculty that is sought. My gripes about the faculty process flow from the following two thoughts:
1. it is very centralising and undercuts local autonomy. The planning process, which the faculty process reflects, is very much a modern creation, part and parcel of a modern Western state.
2. it is highly politicised, in that, if you get English Heritage on side, and you are on good terms with the hierarchy and so on, it is more straightforward to get consent for what you are trying to do. Of course, English Heritage, as their name suggest, have a vested interest in preserving historic buildings and that interest does not necessarily coincide with the interests of an on-going church community.

Now, just as the over-centralised state doesn’t have much of a future in the context of Transition and all that that involves, nor does the centralised structure of the church, of which the faculty process is one example. I can envisage a time – indeed, I know of colleagues’ situations where this has in fact happened – when a church community simply says to English Heritage ‘If you want to keep it like it is, fine, here are the keys, we’re off to rent the School Hall’ (EH backed down on that one).

Put simply, the faculty process is a dinosaur in the time after the comet has hit. In order to prosper, the church must become much smaller and more nimble – the mice that became men, rather than the dinosaurs entering into history. How might that happen? Well… I’d need to do more study to really thrash it out but it would involve a) a massive expansion of the ‘de minimis’ provisions, b) provision of a democratic (parish resident) process to establish consent, replacing the standard DAC/Chancellor system and c) a structural bias in favour of approval vis-a-vis English Heritage, so that they would have to formally object and take a parish to court if they wanted to stop a development, rather than, at present, simply indicating that ‘it wouldn’t be quite right’.

My belief is that this would liberate the church communities to shape their buildings around their worship and life, rather than having to shape the latter to the former in Procrustean fashion. 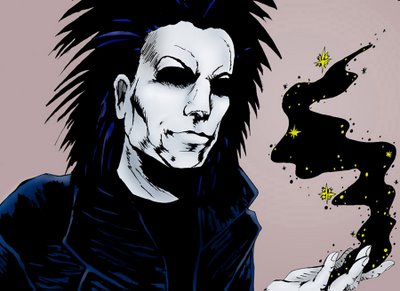 I have been meaning to write this up for ages. There is much theological ore waiting to be mined in Neil Gaiman’s Sandman sequence; this may be the first of a number of posts (but don’t expect any more any time soon – the most important will be one about the nature of story and narrative identity).

The Sandman, also known as Morpheus or Dream, is one of the Endless – seven ‘beings’ or ‘anthropomorphic representations’ of aspects of creation. The story sequence begins with Dream being mistakenly captured by an Aleister Crowley type character, and the initial seven issues of the comic describe the immediate consequences of the capture – Dream’s escape and pursuit of the valuable objects taken from him – his helm, his ruby, and his pouch of sand.

The ruby eventually ends up in the hands of a madman named Doctor Destiny, who uses it to perform diabolical acts, and then to fight Dream himself. Dr Destiny drains Dream of all his power, and then destroys the Ruby, thinking that in doing so he will destroy Dream. In fact the reverse happens – all of Dream’s power and identity that had been vested in the Ruby is returned to him, and he is ‘recalled to himself’, thence easily able to overcome Dr Destiny, and return him to Arkham Asylum.

What struck me on originally reading this passage is that it is a parable for the church and the Bible.

The Church is formed by the Spirit descending at Pentecost; the community gathers for prayer and fellowship, the apostle’s teaching and the breaking of bread; it grows and strengthens around the world. Eventually it creates an object, a tool, which allows it to pursue its ministry – what we call the New Testament.

That New Testament is then taken away from the living church community (which is the only place wherein it is able to be used properly) and diabolical consequences result. In particular, the Bible is taken into the academic community, and is used to make dark materials which are destructive of the church. The academic community has now, in effect, destroyed the Bible that it originally took from the church.

[Mad Priest’s Pre-Biblical Movement prompted me to put this up.]

The conversation that the church needs to be having

Is church too easy for men?

I am becoming more and more persuaded that the most significant problem facing Christianity in England – and the wider West – is that we have lost our magic. In every sense of that word.

Communities that only want those in authority who never make mistakes will always be oppressive.

The following is a letter released today by Lloyd Blankfein, the chairman of banking giant Goldman Sachs:

Up until now, Goldman Sachs has been silent on the subject of the protest movement known as Occupy Wall Street.  That does not mean, however, that it has not been very much on our minds.  As thousands have gathered in Lower Manhattan, passionately expressing their deep discontent with the status quo, we have taken note of these protests.  And we have asked ourselves this question:

How can we make money off them?

The answer is the newly launched Goldman Sachs Global Rage Fund, whose investment objective is to monetize the Occupy Wall Street protests as they spread around the world.  At Goldman, we recognize that the capitalist system as we know it is circling the drain – but there’s plenty of money to be made on the way down.

The Rage Fund will seek out opportunities to invest in products that are poised to benefit from the spreading protests, from police batons and barricades to stun guns and forehead bandages.  Furthermore, as clashes between police and protesters turn ever more violent, we are making significant bets on companies that manufacture replacements for broken windows and overturned cars, as well as the raw materials necessary for the construction and incineration of effigies.

It would be tempting, at a time like this, to say “Let them eat cake.”  But at Goldman, we are actively seeking to corner the market in cake futures.  We project that through our aggressive market manipulation, the price of a piece of cake will quadruple by the end of 2011.

Please contact your Goldman representative for a full prospectus.  As the world descends into a Darwinian free-for-all, the Goldman Sachs Rage Fund is a great way to tell the protesters, “Occupy this.”  We haven’t felt so good about something we’ve sold since our souls.