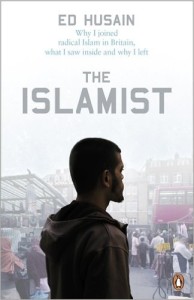 How does an Islamist think? Most especially, what is it that drives young British men to leave their homes and families behind and to trek off to Syria to join up with the crazies in ISIS? Or to stay in this country and perpetrate barbarities like the 7/7 attacks or the savage slaughter of Corporal Lee Rigby on the streets of Woolwich? To begin answering that question, I very much recommend reading ‘The Islamist’ by Ed Husain.

Husain grew up in Tower Hamlets, a child of devout and traditional Muslim parents. When he was a teenager he fell under the influence of more radical teachings associated with the East London Mosque in Whitechapel. As he grew older, his radicalism developed and he became a key recruiter for a group known as Hizb ut-Tahrir (HT), which is an Islamist group dedicated to the establishment of a Caliphate, in which Muslims might be enabled to live fully Islamic lives. If you think that sounds exactly like ISIS you would not be wrong – it’s just that HT is a competing ideology, and rather like with Protestant ideologies in Christianity, the smallest differences make for the bitterest rivalries. ISIS recently executed an HT preacher in their territory.

Husain’s work for HT eventually led to a personal crisis, when a close ally in HT made a violent attack upon a fellow student at Newham college, where Husain had become a student. This led to a process of self-questioning and further intellectual exploration of Islam. Husain learned to speak Arabic properly and spent time in Syria and Saudi Arabia, teaching English as a foreign language and working for the British Council. Over the course of several years Husain was gradually able to shed his Islamist beliefs and return to the form of Islam into which he was raised, one which is centred on a peaceable life and spiritual growth.

Husain’s story is a fascinating one, and one which had particular resonance for me as I spent several years working in Tower Hamlets before coming to Mersea, and so I was familiar with the various locations that he described, and the general culture. I was also reasonably familiar with the divisions in Islam that are the background to Husain’s writings. What Husain provides, and it is invaluable, is an extremely resonant portrayal of how those differences work out in practice. For example, Husain describes visiting Mecca in Saudi Arabia. Many traditional believers who visit that most sacred site do so with a desire to express personal devotion to their prophet. This, however, is complete anathema to the Saudi authorities, who follow a particular brand of Islam called Wahhabism. This brand is very much like the Puritans in our own history – and they violently disapprove of any expression of Islamic devotion that might be taken to imply ‘worship’ of Muhammed.

Husain writes, “While trying to follow in the footsteps of the Prophet, I realized that there was precious little left of his heritage in Saudi Arabia. In Mecca, all historical remnants of the Prophet’s life were destroyed with dynamite for fear of polytheism and in accordance with the Wahhabi mantra of ‘worshipping one God’. To visit the Prophet’s house in Mecca, or to view with awe the houses of his close companions, was now considered shirk or polytheism.”

One of Husain’s strongest emphases is that the Wahhabi form of Islam – which is that which dominates the Saudi nation – is a radical break with more traditional, and more peaceable forms. It is worth remembering that 19 of the 20 hijackers on 9/11 were Saudi nationals. Imagine that our own Oliver Cromwell had won the English Civil War, and that we had then had two hundred years of Puritan government. Imagine further that we had then discovered an immense natural resource under our land, which generated a wealth beyond imagining, said wealth then being used to export Cromwell’s brand of Puritanism – a brand of Christianity that banned the celebration of Christmas – to other nations around the world. Imagine further that this brand of Puritanism taught that Islam was heretical folly doomed to destruction, and that a clear sign of this imminent destruction was the way in which Islamic nations were slowly being converted to Puritan Christianity – and were paying for the privilege no less!

This is how Britain is seen – a moribund nation with no moral strength, which has been captured by the worship of Mammon and is therefore ripe for being converted. I cannot understand how our government can persist in financially and militarily supporting the Saudi regime. It is as if our government sold arms to Russia during the Cold War – these are people who are utterly committed to the overthrow of our pattern of life! Husain is very clear that this desire is in no way hidden in Saudi Arabia: “What I was taught in clandestinely Islamist mosques and cell meetings in Britain was being taught openly at universities in Saudi Arabia. Islamist extremism was nowhere near subsiding.”

After reading Husain’s book, I am left with a few answers and many more questions. I am reassured that there is a form of Islam which is compatible with British life, with which it is possible to have a mutually beneficial dialogue – a form of Islam which is associated with Sufi teaching. My concerns, however, are now even more sharply focussed. How does that traditional form of Islam relate to the more dominant form (historically and today) which has conquered vast territories, conducted indiscrimate slaughter, and now explicitly wishes to destroy Western civilisation? How does it link to the severely pathological cultural norms that have been imported into this country and which drive barbarities like the systematic child abuse taking place in Rotherham and Oxford and elsewhere?

I am persuaded that there are forms of Islam – possibly dominant forms – that are simply incompatible with being British. Unless we take active steps to engage with those forms – to resist them and overcome them – then our way of life will cease. Husain relates an extremely interesting story about the prophet Mohammed. He has been asked to pray for the area of Najd, which is the territory now occupied by Saudi Arabia. Twice he refuses to pray for that area, and in response to a third request he simply says “The horn of evil will appear from Najd”. In that, at least, he was correct.