There is a particular way of viewing the world which has been, in my view, dominant in our society for the last forty years or so. It is the mindset that has largely governed our political leadership and also much of our media; it is certainly entrenched in the BBC. As a shorthand I want to call it ‘progressive thought’ as it is tied up with all the various causes that are seen as being righteous today, so anti-racism, anti-sexism, anti-Islamophobia, anti-homophobia and so on. These are good causes, of course, but it seems to me that there are contradictions embedded in this bien pensant worldview that are now becoming inescapable.

The first, on which I have written in these pages before, relates to immigration, and the fostering of a tolerant and diverse society. It is a good thing to welcome the stranger and the refugee and to provide a home to those who are in dire need. There is good Biblical instruction on this, in both Old and New Testaments. The paradox comes when that welcome becomes ultimately self-defeating, in that the embrace of the stranger fosters a culture which is itself intolerant of diversity. The most prominent form of this is the ‘hate preacher’, commonly found in the Saudi-funded institutions that have arisen here in the last few decades. It has also, I would argue had an effect in other ways in places like Rotherham, where a politically correct attitude has inhibited a vigorous investigation of systematic child abuse. For fear of appearing racist, appalling crimes were allowed to proceed unchecked. The progressive approach wants to avoid both racism and sexism and Islamophobia. Reality, sadly, does not cooperate with such an ambition, and we are being forced to choose.

The second paradox I want to draw attention to arises from a particular story in the United States recently, concerning a woman called Rachel Dolezal. Dolezal was, until a few weeks ago, the area president in Spokane, Washington State, for the National Association for the Advancement of Colored People. This after a career and training focussing on black culture and advocacy. Dolezal was forced to resign after her parents ‘outed’ her as being, in fact, a white woman presenting herself as being a black woman. 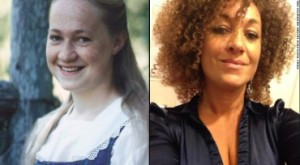 I find this fascinating because it embodies in one person a further contradiction in the progressive world view. As I recall, in the various racist institutions of the American South, the purity of your bloodline was tremendously important, and ‘one drop of black’ meant that you were non-white (the Nazis were slightly less extreme, as they only went back as far as grandparents when assessing race). Now it would seem that, from the progressive perspective, the purity of your bloodline is equally important. You can only work for a progressive institution – and nobody is doubting that Dolezal was doing a good job – if you qualify under the nostrums of racial purity. As I was once told by an African-American Marxist, racism is the belief that there are different races. As soon as you adhere to that point of view then all sorts of follies necessarily follow.

Underlying the Dolezal story, though, is a deeper question about how far it is possible to ‘remake’ ourselves, so that we establish an identity which is in keeping with our deepest motivations even when such an identity seems to go against that which has been set at the biological level. For Dolezal there seems to have been a very sincere and profound identification with African American culture, no doubt strongly influenced by the fact that her parents adopted four African American children with whom she grew up. Since then she has clearly lived her life as an African American woman, to the extent of changing her appearance to fit in with that culture.

This remaking is finding greater salience with the rising prominence of ‘trans’ issues, whereby people are able to change their biological inheritance to be more in accord with their own self-perception of identity. Some of the fiercest criticisms of this development have come from a particular strand of feminist thinking, which insists that even when obvious physical signs are changed, someone with a certain chromosomal pattern will always and forever remain what that chromosomal pattern dictates for them to be. In other words, there is something essential about being male or female that cannot be changed, no matter what else happens. One drop of male and that’s it.

This simply demonstrates to me the inadequacies of such essentialist thinking, where there is an insistence that people have to be placed in one of two boxes ‘male’ and ‘female’ (or ‘black’ or ‘white’). What happens if someone doesn’t qualify under either heading? It brings the classification system itself into question.

This thinking is a key part of what underlies the teaching in Leviticus 18 & 20 that it is an “abomination” for a man to lie with a man. The understanding is that there is a right way for sexual relations to be ordered, and it involves the two parties being members of particular and opposite categories (with male superior to female of course); the boundaries must not be transgressed. Human beings have to fit into the different categories (‘male and female he created them’) and, again, if there are people who don’t fit, it brings the classification system itself into question.

What I want to ask is: where are Christians called to stand today? Are we with Leviticus in saying that there is something essential that needs to be safeguarded and preserved – the boundaries are absolute? Or are we prepared to be flexible, allowing our categories to be bent?

For me the answer is pretty clear. We are called to recognise and relate to all people as individuals, not as members of one class or another. I see this as a development rooted in Christian understandings, and a natural development of them – not so much in Scripture as the unfolding of a tradition from that Scripture, specifically the teaching that in Christ there is no male or female – in other words, in Christ all the old essentials have been dissolved. Our identity now rests in our relationship with Him and all the other categories can get lost.

From a Christian point of view, we are all fallen – in other words, we are all queer, bent and broken. The important and interesting thing is what we are enabled to become over time as the grace of God is set free to work within us: not what we were, but what we yet might be.