Haven’t seen any memes for a while, so I thought I’d start one: have a dinner party!

Rules: you have to have 12 people, including yourself. Of those there need to be at least four men, at least four women, at least four known to you personally and at least four who are “famous”. You’re not allowed anyone who has passed on to the great hereafter – that would be a rather different sort of party. It needs to be one that might plausibly ‘work’ (ie don’t just pile people together). You also need to choose a place/ style of food.

Here’s my starter (in a manner of speaking)

Me
My wife
My best man
His wife

And we’d eat at Rules, and we’d have some stonkingly wonderful Burgundy.

And I tag – anyone who wants to join in. Which, given the state of the blogosphere at the moment, is likely to be a very small number….

Graham tagged me with this one, simply ‘your best contemporary worship song ever’. I don’t know about the ‘ever’ part, but this is my answer:

(A video I made a few years back, using some of my beach photos). Very singable, sound theology, lots of personal meaning from the symbolism… what’s not to like?

We care so much about music in worship – and we care because it matters.

Some good thoughts from Tim here, and the Artsy Honker here, and I am shamelessly stealing this CS Lewis quote from the latter, which I love:

“There are two musical situations on which I think we can be confident that a blessing rests. One is where a priest or an organist, himself a man of trained and delicate taste, humbly and charitably sacrifices his own (aesthetically right) desires and gives the people humbler and coarser fare than he would wish, in a belief (even, as it may be, the erroneous belief) that he can thus bring them to God.

“The other is where the stupid and unmusical layman humbly and patiently, and above all silently, listens to music which he cannot, or cannot fully, appreciate, in the belief that it somehow glorifies God, and that if it does not edify him this must be his own defect. Neither such a High Brow nor such a Low Brow can be far out of the way. To both, Church Music will have been a means of grace; not the music they have liked, but the music they have disliked. They have both offered, sacrificed, their taste in the fullest sense.

“But where the opposite situation arises, where the musician is filled with the pride of skill or the virus of emulation and looks with contempt on the unappreciative congregation, or where the unmusical, complacently entrenched in their own ignorance and conservatism, look with the restless and resentful hostility of an inferiority complex on all who would try to improve their taste – there, we may be sure, all that both offer is unblessed and the spirit that moves them is not the Holy Ghost.”

My musical thought for the day: mindless and emotive worship music is popular (in some circles) because it is a corrective to the excessive rationalism promoted (in some circles) by our culture. It might explain the apparent paradox of brilliant IT nerds enjoying near-fundamentalist churches – it brings balance to their force 😉

Here’s the meme, again from Doug, who won’t let me escape…

1. Choose a hymn that you love to hate. It must be in a widely used and current hymn-book.
2. Say why.
3. Tag three people.

An honest answer would be ‘All Things Bright and Beautiful’ but I think that would be too easy. So a possibly controversial one:

1. Make me a channel of your peace.
2. A good prayer set to a difficult tune which is often murdered by a congregation that is unfamiliar with it. What makes it worse is that it is quite often chosen for funerals because people have been exposed to a good performance by a pop star (eg here) and the sentimental level is pushed up to 11. Blech.
3. I tag: Byron, Cranmer and Dave W. 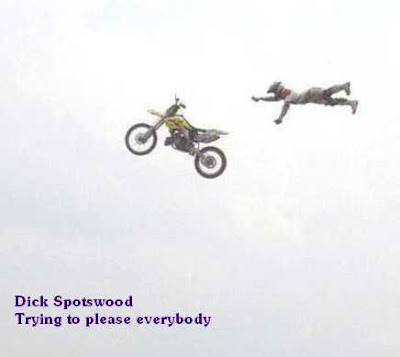 1. Go to Wikipedia & hit random. The first article you get is the name of your band.
2. Go to quotationspage.com & hit random quotes. The last 4 or 5 words of the very last quote of the page is the title of your album.
3. Go to flickr and click on “explore the last seven days”. The 3rd picture no matter what it is, will be your album cover.
4. Use photoshop or similar (picnik.com is a free online photo editor) to put it all together.

If you read this, you are tagged.
Confession – I had to cheat a little on #3 as Flickr wouldn’t let me download the picture, so I went to Google, searched for ‘random image’ and went for something that seemed to fit…

This is an interesting one (from Khanya). “The rules: Don’t take too long to think about it. Fifteen films you’ve seen that will always stick with you. List the first fifteen films you can recall in no more than fifteen minutes.”

If you read this, consider yourself tagged.

Using only song names from ONE ARTIST, answer these questions. Be as clever as you can. You can’t use the band I used. Try not to repeat a song title. It’s a lot harder than you think…

How do you feel: I have come to sing

If you could go anywhere, where would you go: Vegas

Your favourite form of transportation: Walk down the mountain

Your best friend is a: Gift to me

You and your best friends are: Contradictions

If your life was a TV show, what would it be called: Whoever it was that brought me here will have to take me home

What is life to you: This fragile world

Your current relationship: My love, my life

Your fear: Nobody loves you anymore

What is the best advice you have to give: Kiss the world beautiful

Time of day: Let’s talk about it in the morning

My motto: Yet still this will not be

1) Turn on your MP3 player or music player on your computer.
2) Go to SHUFFLE songs mode.
3) Write down the first 15 songs that come up–song title and artist–NO editing/cheating, please.

Phil tagged me with this.

1. Your first post: Working out how to use this thing

2. A post you enjoyed writing the most. ‘The most’ is much too restrictive, as I’ve enjoyed writing on the blog a lot. If I can take enjoyment to mean cathartic, probably this one.

3. A post which had a great discussion. To my very great regret several years worth of commenting on this blog is now in cold storage, awaiting the day when Haloscan comments can be imported into blogger – so you can’t see the answer to this one.

4. A post on someone else’s blog that you wish you’d written. Ooh, how to choose this? So many contenders. It would probably be something by John Michael Greer. I’m trying to do from a Christian point of view what he has done from a Druid point of view, but there is a lot of overlap.

5. A post with a title that you are proud of. The colour of my shirt.

6. A post that you wish more people had read. This one on the authority of Scripture (and my Anglican triangle)

7. Your most visited post ever. Don’t know. Might be this one, which tells you all you need to know about blog stats.

I tag Banksy and Doug.

Jon has tagged me with another meme. This one is: “To list an artwork, drama, piece of music, novel, and poem that you think each express something of the essence of Christianity and for each one explain why. Then tag five other people.”

Artwork: Resurrection, Cookham by Stanley Spencer. This has always struck me as the perfect expression of Easter in Ordinary.
Drama: Magnolia (assuming that ‘drama’ isn’t restricted to the stage). A warts’n’all portrayal of modern life, which nevertheless contains the rumour of grace and forgiveness.
Music: haven’t I said enough about music recently? OK, off the top of my head: Leonard Cohen’s Anthem, which I’m listening to a lot at the moment. The light gets in through the cracks; in other words: pride leads to darkness.
Novel: The Chronicles of Thomas Covenant; I’m thinking especially of the second series and the way in which Covenant’s ‘poison’ is redeemed, which seems authentically orthodox.
Poem: Teach me my God and King, George Herbert – if we do what we do for God, then all shall be well (a theme of mine at the moment)

BTW readers in the UK are strongly recommended to watch this programme on the IPlayer which is highly relevant (and it might not remain up for much longer).

Back from a great cell group retreat and find that I’ve been tagged by Sally and Banksy to “Summarise the Bible in five statements, the first one word long, the second two, the third three, the fourth four and the last five words long. Or possibly you could do this in descending order. Tag five people.”

God
uttered light.
We chose darkness.
The Son shines still;
we who believe shall live.

Everyone has been tagged already!